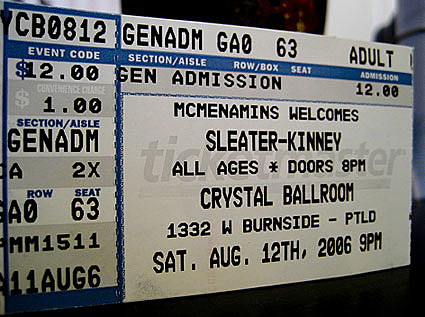 THE MP3S
Sleater Kinney's last show took place at the Crystal Ballroom in Portland, Oregon on August 12, 2006. The Thermals opened and Pearl Jam's Eddie Vedder made a surprise appearance. Ryan of Ryspace flew to Portland for the show, taped it, and posted the MP3s - HERE and HERE.

PITCHFORK WAS THERE
"In retrospect, Sleater-Kinney's final show-- at Portland's majestic Crystal Ballroom, where stage lights cast the band in giant hazy shadows on the wall behind them-- emphasized exactly how many of their lyrics were, in fact, about breaking up, leaving, and saying good-bye, a not unlikely foundation for a band comprised of a former couple (Tucker and guitarist/singer Carrie Brownstein dated for a time)." [Pitchfork]

I NEED TO POST THAT PLAYLIST
I noticed the "many songs about saying goodbye" thing too when picking songs for my tribute to SK Sirius radio show, which aired before the last-two Portland shows, but after their last NYC show. I still need to post that playlist.