No, Teen Wolf did not play Terminal 5 Saturday night. 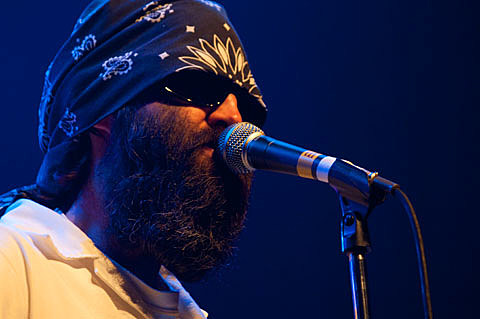 Considering the genres and subgenres and whatever other classification you want to put Eels into, the two openers for Saturday night's show at Terminal 5 (9/25) were an odd trio. Carla Rhodes, also known as the "Rock and Roll Ventriloquist" - comedienne and ventriloquist alike - produced a Keith Richards dummy from her traveling suitcase and sang "Dead Flowers" with it. Not to be topped, her second puppet act, Cecil Sinclair sang songs about saltwater taffy and commanded her to "crank up that Victrola!"

Second act Jesca Hoop, donning a hot pink top with bell-shaped sleeves draped over her acoustic guitar, possessed a pure and ethereal voice and also made an unlikely pairing with the Eels. Hoop sang a "batch of precocious tunes" for us (her words) in a light, airy soprano that impressively did not lose its airiness even when visiting the lower registers. Her style is very Regina Spektor-like at times, switching octaves and then continuing on in a smooth legato. While the songs on her album Under My Dress are backed by a full band, Hoop's performance was solo, only accompanied by her guitar and would fit perfectly on a bill with Sarah McLachlan and co.

The Eels took to the stage after an odd symphonic prelude of "When You Wish Upon A Star" while the stage lights illuminated the various instruments atop it. Mark Oliver Everett, ubiquitous front man for the Eels, started the show with a solo version of "Daisies of the Galaxy," from 2000's album of the same name. Looking much like a painter/trucker, Everett had his head wrapped in a blue bandana and wore all white, rocking his signature grizzly beard. Switching guitars, he went on to play a version of "What I Have To Offer," still solo but accompanied by band mate "The Chet" on slide guitar. The whole band hopped on for the first ensemble song "Prizefighter," off 2009's Hombre Loco, and from there on out performed material from the newer albums - the aforementioned Hombre Loco, End Times, and just released Tomorrow Morning. No one can accuse E of slowing down (the man's almost 50), as he and the Eels have released 3 records in a little over a year's time.

One instrument missing from the stage altogether was Everett's signature Wurlitzer electric piano, used heavily on Beautiful Freak, Daisies of the Galaxy, and Blinking Lights. This Terminal 5 show was just straight up, gritty, down-home rock 'n roll. E and the band revisited the past a few times with "Jungle Telegraph," "Dog Faced Boy," and a couple revamped versions of "My Beloved Monster," "Mr. E's Beautiful Blues," and "I Like Birds." Everett howled like a banshee on "Fresh Blood" and performed a retro cover of The Lovin' Spoonful's "Summer In The City."

The band consisted of Everett, The Chet, and new kid P-Boo on guitars, bassist Cool G Murder, and Knuckles on drums. With 3 guitars simultaneously riffing on "Souljacker Pt. 1," it occurred to me that having that many guitars on a live stage was like typing in all caps - a little unnecessary, but hella fun. Eels wrapped up the show with two encores, one a somber "I'm Going To Stop Pretending That I Didn't Break Your Heart" and finished the night with "I Like The Way This Is Going" and "Baby Loves Me."

Fans expecting to see emo-Eels perform stuff off Beautiful Freak or Blinking Lights would have been sorely disappointed, as it's obvious Everett is going through some type of mid-life rocker phase. Proving his vocal chops are still intact and that he's versatile as ever, it's clear that E and the Eels are definitely not too old to party.

More pictures fom the Eels Terminal 5 show, though unfortunately none of ventriloquist Carla Rhodes, with remaining tour dates, below... 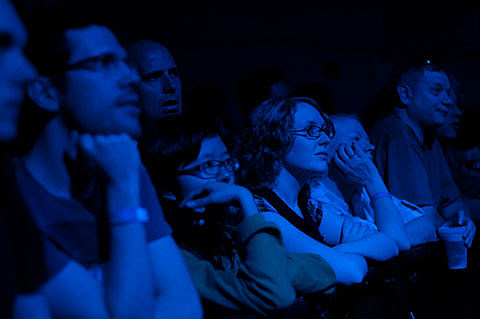 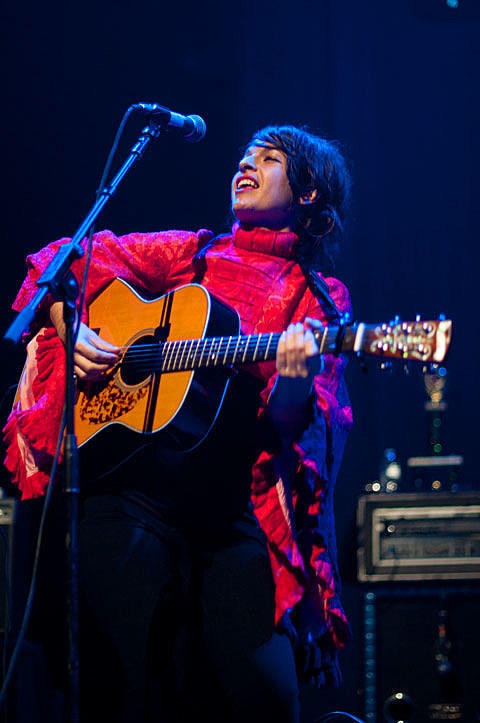 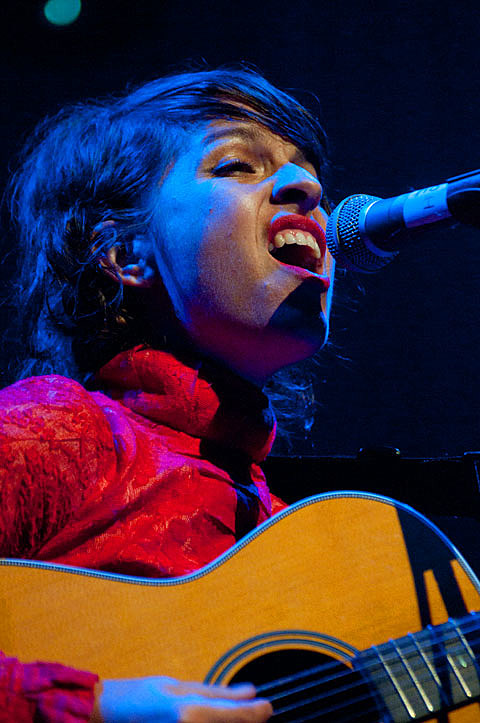 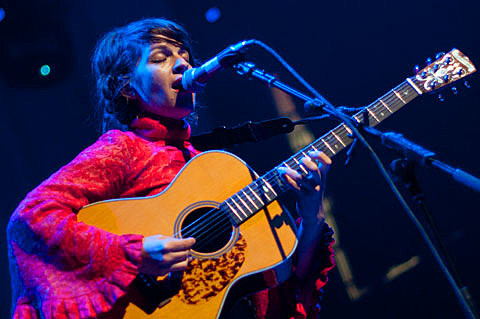 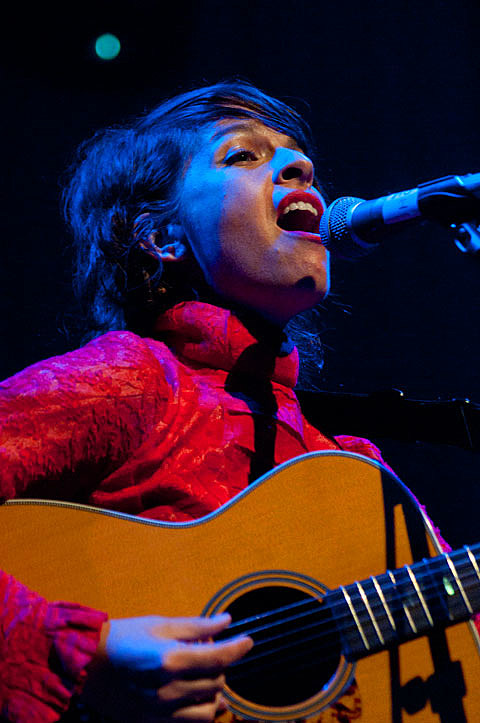 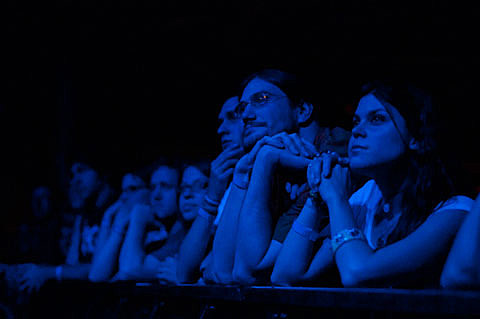 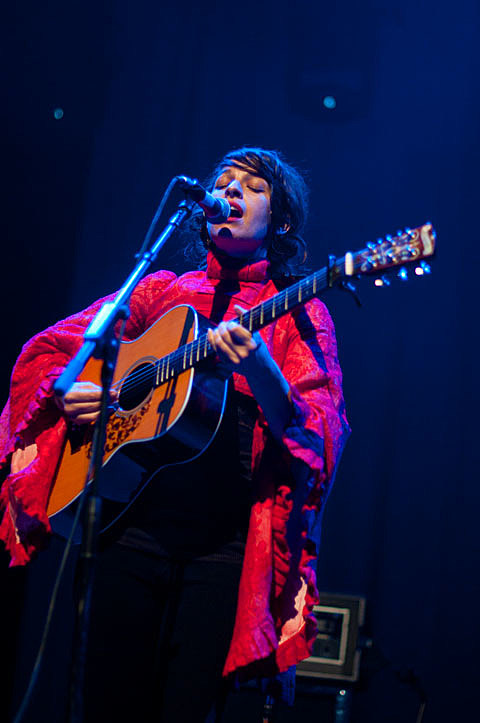 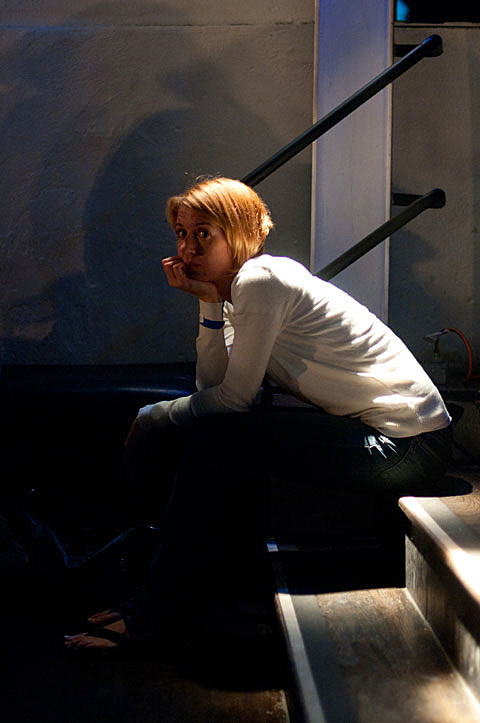 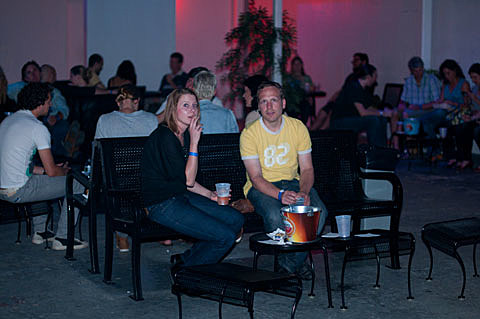 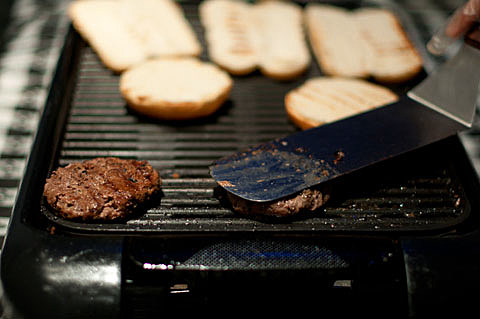 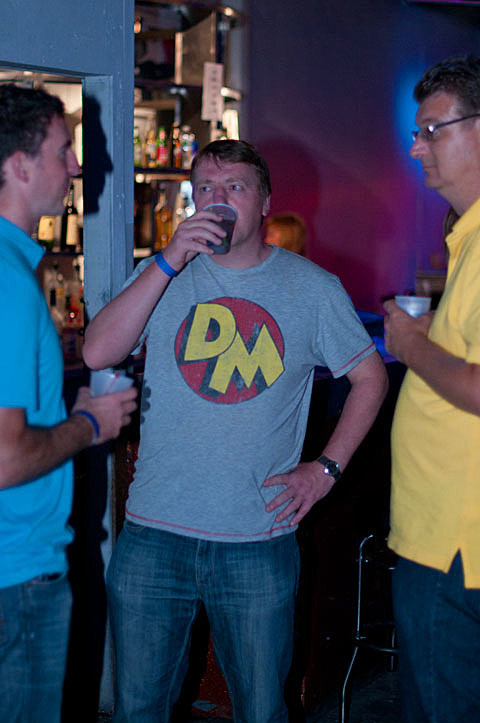 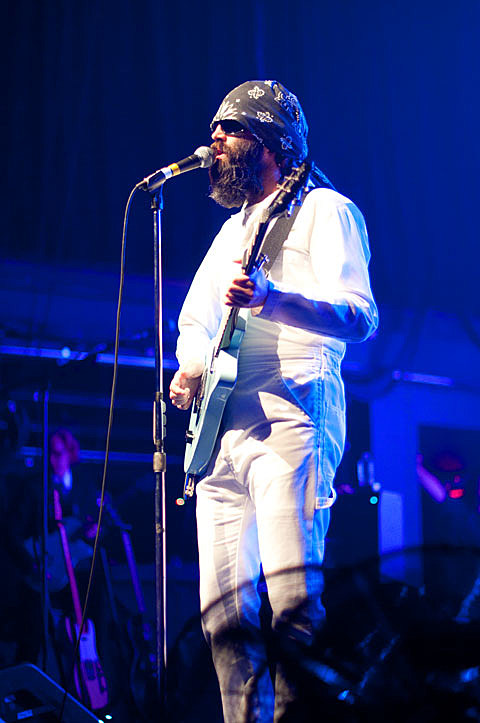 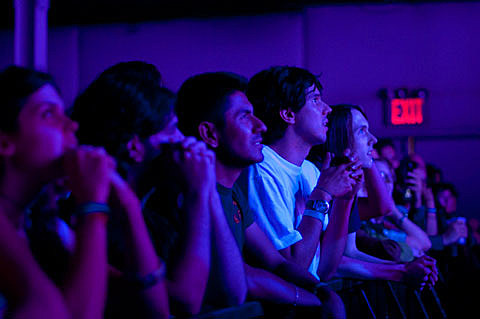 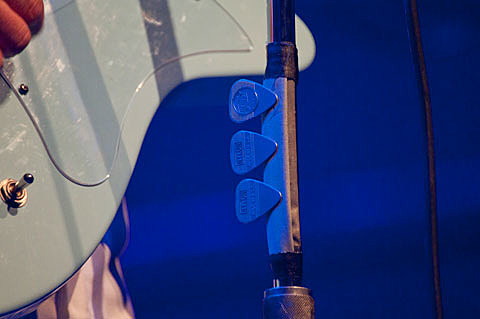 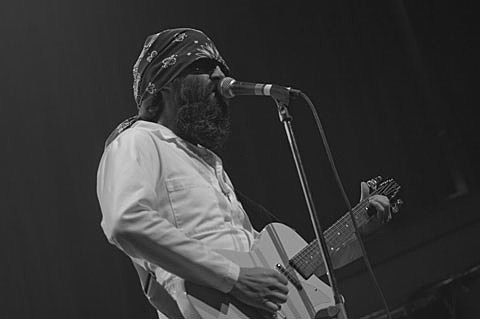 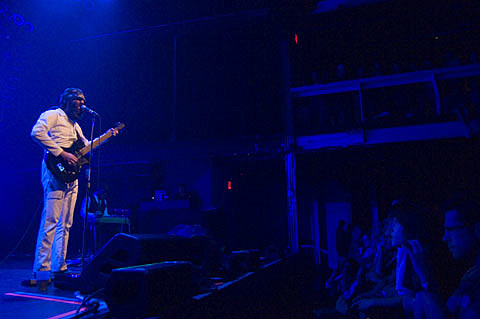 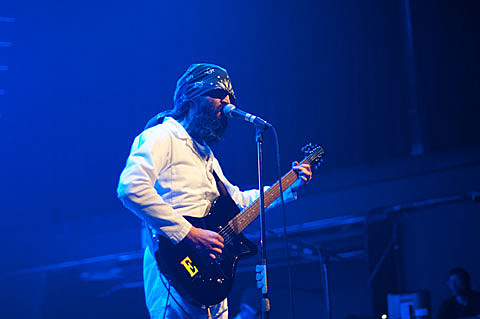 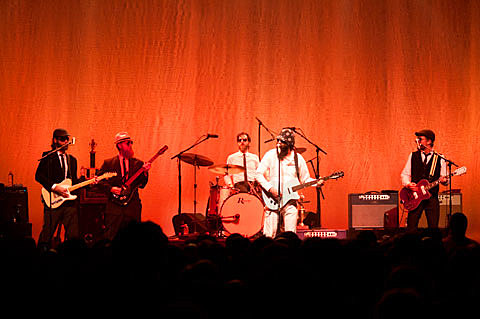 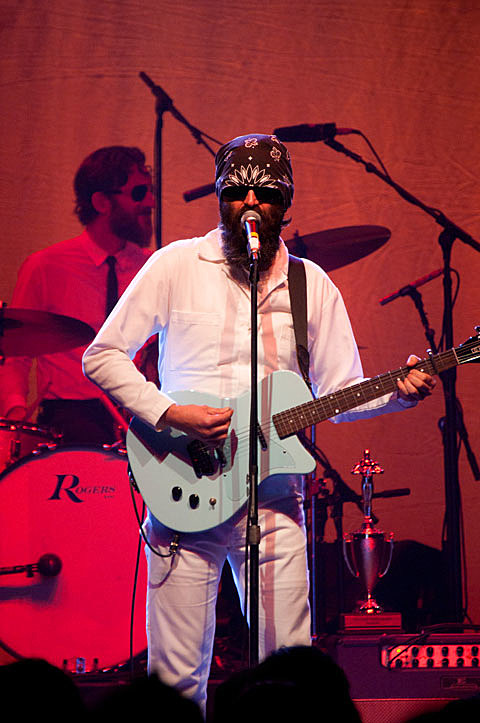 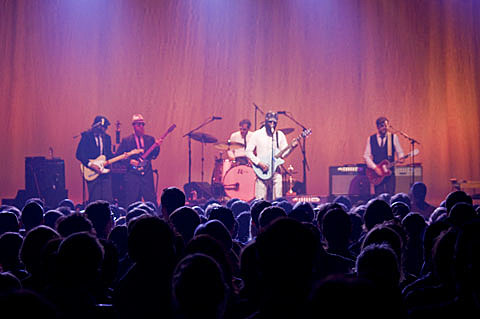 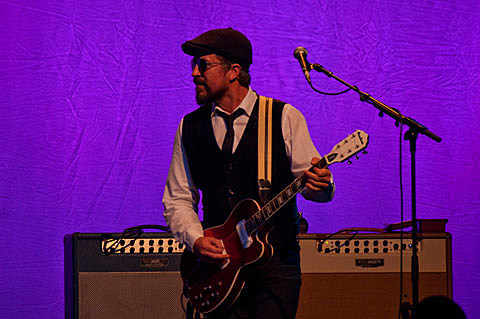 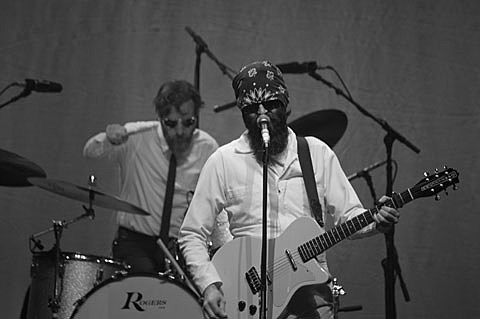 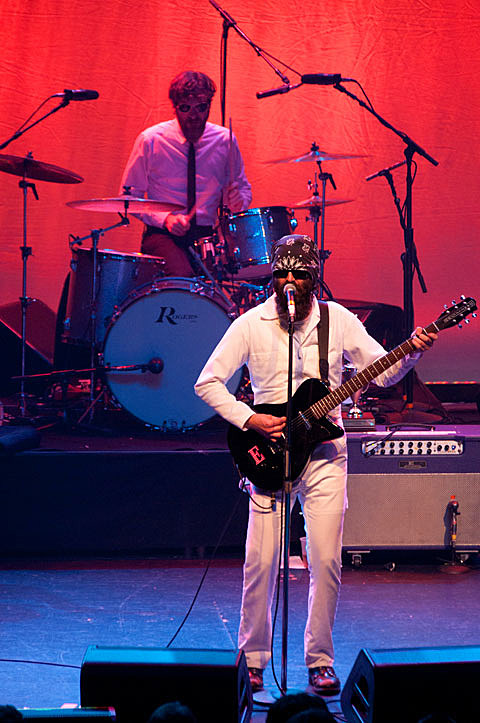 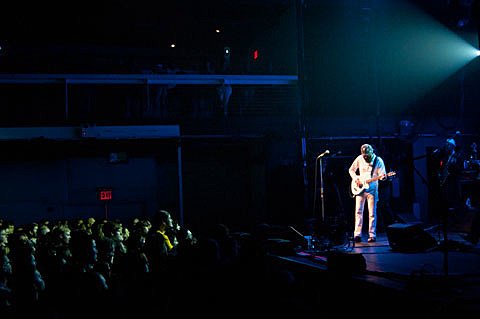