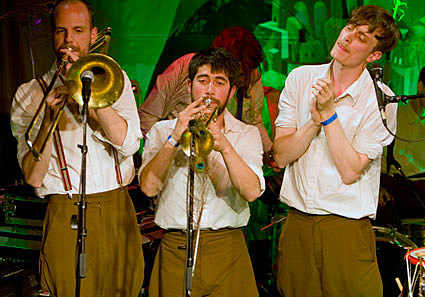 ...toured its 2007 album Parades for 14 months, performing 133 shows across the planet. This new North American tour will be the first opportunity to hear some of the band's new material being road-tested before they head back into the studio to record their third album, due for release in 2010.

Efterkland has four dates marked off for SXSW shows between March 18-21, after which the band will tour its way to NYC for a Saturday, March 28th show at Mercury Lounge with Shilpa Ray (tix on sale now).

In 2008, Efterklang joined fellow Danes Slaraffenklang (who will be at SXSW this year too) in touring US and Canada as The Danish Dynamite Tour, which included a NYC gig at Knitting Factory (5/28/08).

On the last show of that tour, the bands joined forces on stage to form "Slaraffenklang", releasing the result as a free four song EP, Danish Dynamite Live at Sono Festival 2008. The story behind the EP is posted below.

Efterklang also is prepping a live CD/DVD, which documents the band's September '08 performance of its Parades album accompanied by the the Danish National Chamber Orchestra.

EP story, some videos, and all of Efterklang's tour dates dates, below... 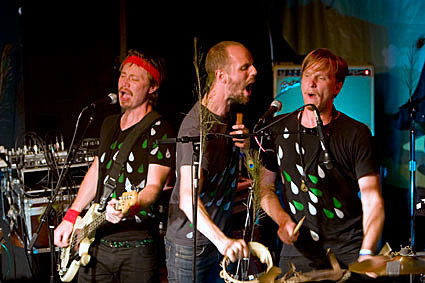 In May 2008 Efterklang & Slaraffenland were on a joint US tour under the name The Danish Dynamite Tour. Halfway through the tour the bands got a call from back home. The newly established Sono Festival wanted to hear if Slaraffenland and Efterklang could be interested in performing a special concert at their festival. After a very quick talk on the topic it was decided that everyone would love to play in a band with two drummers and a lot of distorted guitars and therefore the offer was accepted.

The 4 songs on this free live EP are all recorded at Sono Festival in Roedovre (a suburb to Copenhagen) November 8th 2008. This was the first and maybe also the last concert with Slaraffenklang. The idea is simple and fun. Slaraffenklang is the mutant band of Efterklang and Slaraffenland. There are 12 musicians on stage, all men, and the songs performed are covers of Efterklang and Slaraffenland. Sometimes just louder and more rumbling versions and sometimes in new slightly new arrangements.

Efterklang - "Cutting Ice To Snow" from Herzliya Films on Vimeo.