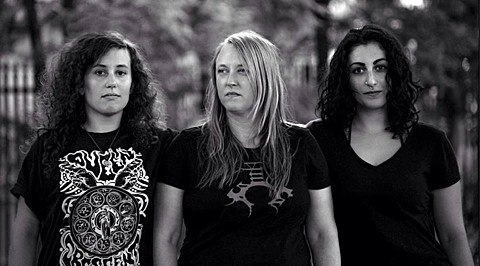 Portland experimental doom trio Eight Bells are preparing a new album called Landless which is out February 12 on Battleground and was produced by the legendary Billy Anderson. They're now streaming the first song from Landless, which is called "Hating." The song plays like a refinement of what Eight Bells did more long-windedly on their last album The Captain's Daughter. There's a classical doom feel to this that's wedded to a modern sense of progressiveness, with reverb-y harmonies and organ melding creating a vivid contrast with the driving, powerful drumming of new member Rae Amitay. It's good stuff, and you can stream it below.

Eight Bells will soon be heading out on that previously-mentioned tour with Voivod and Vektor that hits NYC for a show at Gramercy Theatre on 2/7 (tickets) and then NJ at the Stone Pony on 2/11 (tickets). All dates are listed below.

Rae, the new drummer, is the Chicago-based musician who also drums for Thrawsunblat and fronts the excellent death/grind band Immortal Bird. Immortal Bird released their debut LP Empress/Abcess this year which, if you missed it, is an absolutely vicious series of catchy, grindy rippers. The band wears its influences (as IO notes, Converge and Pig Destroyer come most quickly to mind) proudly, but executes at such a high level that you're too busy headbanging to notice.

Stream the new Eight Bells song (via Noisey) and the Immortal Bird album below...