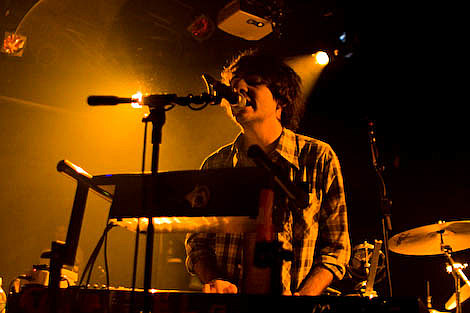 "Is it possible to feel sad listening to El Guincho? On a cold winter day in Seattle, when Pablo Diaz-Reixa (a.k.a. El Guincho) brought his Tropicalia-inspired rhythms to the KEXP studios, I felt like I was standing next to him on a warm beach in his native Canary Islands.

Accompanied only by percussionist Aleix Clavera, El Guincho re-created live the sounds of the album and its amalgamation of cultures: a swirling mix of Afrobeat, dub, Calypso, American rock, Latin pop and many others. If the tribal rhythms don't get you dancing, the hypnotic chanting certainly will. Fans of Animal Collective will recognize a similar reverb-laden experimentalism, and like its American counterpart, El Guincho benefits from just the right amount of complexity. Beneath the ethereal harmonies and airy washes of sound lies a certain tension, as the music seems both reassuringly familiar and totally alien." [NPR]

That session's from 2008, when El Guincho brought his poppy-collage LP Alegranza! stateside. He'll be back for shows this summer, including a gig at (Le) Poisson Rouge (a venue he played in December '08) on Wednesday, July 7th. Tickets are on sale.

All tour dates and a video of El Guincho playing in the "rainforest" (or the rainforest display at the Natural History Museum of Los Angeles County) are below...