El Guincho before his Gorilla vs. Booze set, SXSW (GVB) 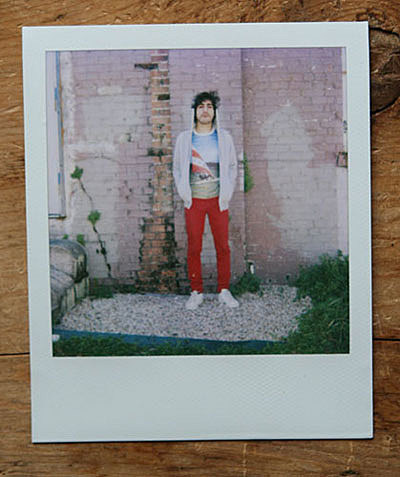 El Guincho played what I think was his first-ever NYC show last night at Mercury Lounge (March 17). He wasn't originally on the sold-out bill that included Cut Copy as the headliner, and for that reason I think his early set was less crowded than it would have been had tickets been available at the door.

With full command, el Guincho plays a perfectly mixed together set of (I like this description...) "Spanish chanting, thudding tribal rhythms, ghostly harmonies, and the bits and pieces of a thousand as-yet-unwritten pop songs". At first it just seems like someone on stage hitting play on pre-recorded music, and I wanted to hold that against him, but I couldn't. The quality of the tracks, the order he plays them in, and the non-trivial addition of his own voice and drumming definitely help create a unique, live, and very danceable, situation. This review from a SXSW show is good...

The highlight of the evening was Barcelona, Spain's El Guincho which was one dude with a Roland sampler he'd play with his left hand and a drumstick in his right hand playing percussion. "Give me more bass!" He'd command the soundman, "No more bass! I want to feel it! No! No! Mooooore Bass!" That fucker had it right. Once he got the sound he wanted, the thump of the floor tom would simply drive the audience nuts. The percussion was a fast bouncy beat far removed from the more familiar club beats of Fuck Buttons. These were poppy happy "get your ass up and dance" beats. In short, he was a one person Carnival except we weren't parading down a street but hopping up and down in a club. Yes, even I, the non-dancer, found myself bouncing up and down! That is quite an accomplishment.

Check him out tonight at Union Pool for free if you can.