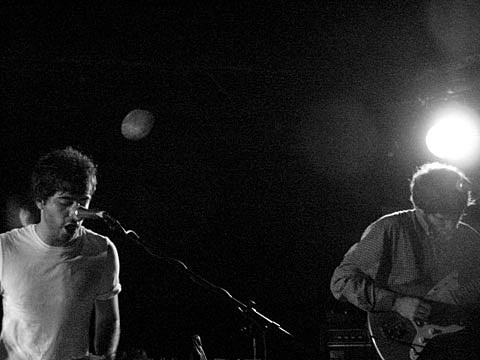 Peering up from a table full of electronic gadgetry, Pablo Díaz-Reixa, the Spanish musician behind the recording alias El Guincho, asked, "Do you like my music?" This still being the beginning of the show, the ambivalent crowd responded with scattered applause, lightly affirming the lead man. "I like my music," he jokingly responded. In retrospect, this stood as a defining moment for the night. Díaz-Reixa, joined by a similarly bearded guitarist and bassist, jettisoned the slow-moving, mid tempo songs off his new album, Pop Negro, for frantic, loop-driven jams off of his masterpiece, Alegranza. While Pop Negro often clarifies the loose, repetitive nature of Alegranza, the latter moves bodies far more effortlessly than the former. However, each showcases Díaz-Reixa's talent for channeling a distinctly Spanish sound into exotic yet familiar dance music. It is this unique talent that drew a near capacity crowd to the Mercury Lounge on Tuesday night.

El Guincho's set began with Pop Negro's most catchy tunes, "Bombay" and "FM Tan Sexy," a song that evokes "hearing a top single on the radio." Díaz-Reixa, manning a drum pad, keyboard, and sampler, appeared quite busy controlling the flow and tempo of the show. The other members contributed with excellent harmonies and balanced the otherwise heavily electronic sounds with live instrumentation. "Palmitos Park" and "Buenos matrimonios ahí afuera," both off of Alegranza, came toward the end of the set and exemplified the groups' cohesion. And, as the crowd finally matched the frenzied state of the music, El Guincho's energy amplified to levels uncontainable within the confines of the Mercury Lounge. Those closest to the stage, danced, jumped, and moshed to the last song "Antillas" like it was the last song they would ever hear.

So, now do you believe that we like your music, Pablo?
[Playtonic Dialogues]

El Guincho continues his 4-NYC-show run tonight (9/29) at Santos Party House. Video of someone (Kiku) dancing on stage at last night's show, below...