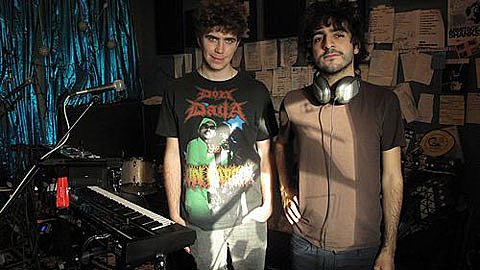 El Guincho will release his new LP Pop Negro to the world on September 14th via Young Turks. Download two of the nine tracks on the album above, and check out a "video" featuring one of those tracks, "FM Tan Sexy", below.

Two weeks after Pop Negro hits store shelves, look for Pablo Diaz-Reixa to play Mercury Lounge (9/28), his only US tour date announced at the moment. Tickets go on sale at noon today (8/27).

El Guincho's last U.S. shows were in July, and one of those was at a space much larger and brighter than Mercury Lounge...

"El Guincho, aka Pablo Díaz-Reixa, caused quite a stir among the Pitchfork set a couple years back with his sophomore album Alegranza, an aptly titled mish-mash of upbeat samples and hypnotic rhythms, part hyper one-man band, part calypso revival. The Canary Islands-born, Barcelona-based musician just released an EP entitled Piratas de Sudamérica, and has another full-length album slated to drop in the fall. And his fans were clearly ready.

Unfortunately, the great outdoors [at Central Park Summerstage on July 7th] was probably not the best venue for him, as the complexity of his music's different layers and harmonies got a bit lost in the large space, but that didn't keep him from jamming out. He was dwarfed by the massive screen behind him, rocking short shorts and a white polo shirt that was soon completely soaked with sweat. El Guincho was thrilled to be there and stopped at one point to explain his enthusiasm: "Sorry, it's been a long time since we've played together!" in reference to the two bearded redheads playing guitar and bass with him." [MTV Iggy]

All dates and that video is below...

--
Alfre and Carlos Show Us How to Enjoy Pop Negro