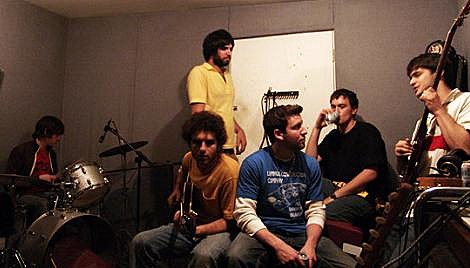 They sound vaguely familiar, but it's not the same. That's the beauty of the El Michels Affair's covers of classics by Wu-Tang Clan - tracks like "Bring Da Ruckus" and "C.R.E.A.M." maintain the essence, but go off into a different realm. Both of the above tracks come from El Michel's Affair's sophmore album Enter the the 37th Chamber (get it?), due on April 21st via the mighty Fat Beats Records.

Led by saxophonist/organist Leon Michels and producer/engineer Jeff Silverman, El Michels Affair began as a loose collaboration of session musicians (including members of top-selling acts Sharon Jones & the Dap Kings, The Budos Band, and Antibalas) ...[and led to their] 2005 debut album Sounding Out the City, which earned critical acclaim and acted as the inaugural full-length release for Michels and Silverman's burgeoning label Truth & Soul (also the moniker for the duo as a production team).

Both "C.R.E.A.M" and "Bring Da Ruckus" were initially featured on a Truth & Soul 7"s which have since sold out.

In related news but more in the "i'll believe it when I see it" category, Raekwon's forever "coming soon" LP Only Built For Cuban Linx 2 is set to hit the store shelves this summer. So far, the new single "The New Wu" featuring Method Man & Ghostface is getting burn from mixtape DJs, and their publicist has released the following list of collaborators for the follow up to the 1995 Wu classic: The RZA, Dr. Dre, J Dilla, The Wu-Tang Clan, Jadakiss, Busta Rhymes, Bun B and The Game, among others. Dilla Dog and The Chef? Sign me up, yo.

Check out the below videos for more on the El Michels Affair, including a cover if the Wu classic "Can It Be All So Simple", and live videos with Raekwon including the Cuban Link classic "Criminology"!

El Michels Affair - "Can It Be all So Simple"