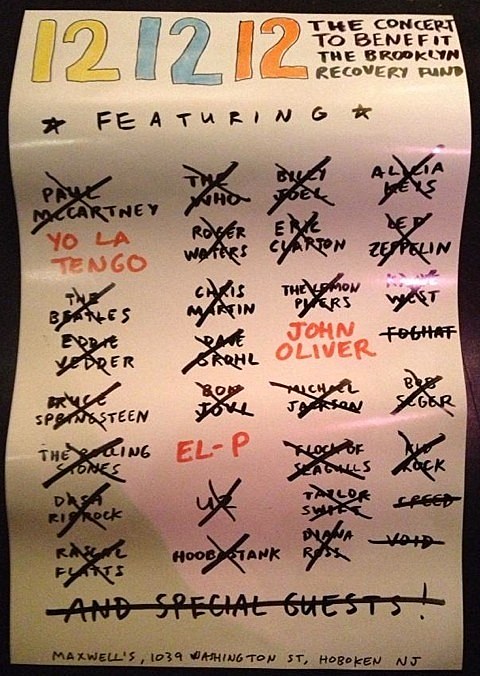 James has been doing the poster at the door each night, and doing great work (in fact, Sunday's poster may have been too good -- stolen within seconds of being taped up). But he outdid himself last night...

...By now, the careful reader has surmised that the night began with a set by El-P, supported by Shannon Moore and backed by a three-piece band including James on bass. It looked to me like culture shock in the best sense-I'm not going to pretend I attend a lot of hip-hop shows, and clearly El-P is used to seeing a lot more hands in the air when said request is made. On the other hand, the singalong on "No Kings" went kinda swimmingly.

During this Sandy-related Hanukkah (by now, the careful reader knows last night's charity was the Brooklyn Recovery Fund), it was especially helpful to have John Oliver join us to provide some much-needed perspective. It's not damage from the storm that should be worrying us, it's America's declining empire and the digital record we're bequeathing to future generations. He suggested a few more looted treasures and a few less videos of being kicked in the family jewels. And maybe a new national anthem. - [YLT]

On the fifth day of Hanukkah, while some of the biggest names in rock were playing abbreviated sets at Madison Square Garden, Yo La Tengo performed their entire Maxwell's set as a trio, which hasn't happened this week yet. The evening's special guests were El-P and comedian John Oliver. Night 5's mix was made by YLT drummer Georgia Hubley and proceeds went to the Brooklyn Recovery Fund.

Three more nights of Yo La Tengo Hanukkah action left. Who is going to open tonight? UPDATE: It's Barbara Manning and Eugene Mirman, with the mix by Three-Lobed Recordings.

Night 5's setlist and mix CD cover art are below. 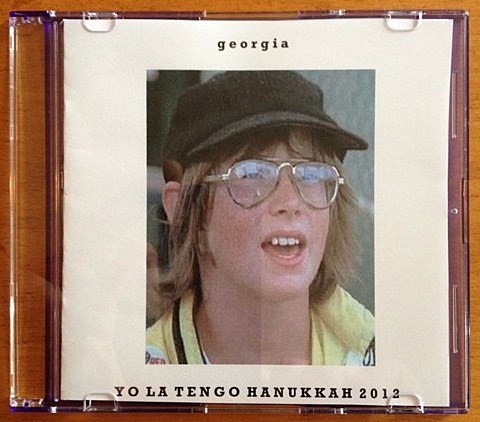 SETLIST: Yo La Tengo @ Maxwell's, 12/12/12 (Hanukkah Night 5, via)
From A Motel 6 >
I Should Have Known Better
Here To Fall
Can't Forget
I Can Hear Music (Jeff Barry, Ellie Greenwich, & Phil Spector)
If It's True
Mr. Tough
Nowhere Near
Cornelia and Jane
Deeper Into Movies
Some Kinda Fatigue
Sugarcube
The Story of Yo La Tango