El-P at Santos (via kristinsayz) 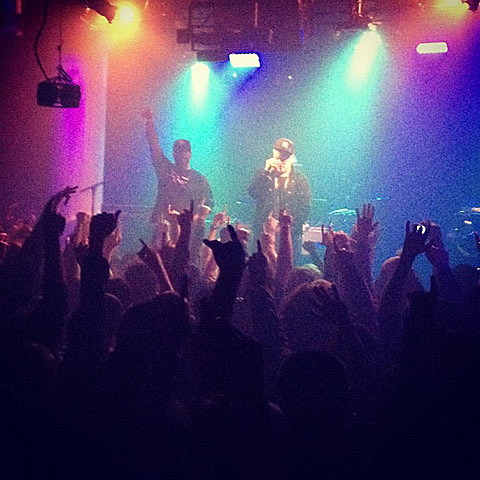 Last night, before a tightly-packed Santos Party House in downtown Manhattan, El-P showcased his new work in its entirety, front to back...
Opening with the rave-like "Request Denied" and blazing the stage with bangers "The Full Retard" and "Drones Over Bklyn," El-P worked the crowd into a frenzy with relative ease. He was joined by many guests including show opener/Def Jux refugee Despot and new best bud Killer Mike on "Tougher Colder Killer," Das Racist's Himanshu on "True Story," Nick Diamonds of Islands on "Stay Down," and Mr. Muthafuckin' eXquire on "Oh Hail No." The one bummer of the night was Danny Brown was apparently not able to make it out for his verse. However, Action Bronson did appear on stage at one point. He didn't get on the mic, but he did smoke two gigantic joints on the side of the stage which was a spectacle in and of itself. -[Death & Taxes]

As hypothesized and then confirmed, El-P was joined by a cavalcade of guests during his Cancer 4 Cure release party at Santos on Monday night (5/21). Check out some videos of El-Producto from Santos that night below.

Next up, a US tour for El-P, Killer Mike, Mr. Muthafuckin' eXquire and Despot. Initially, no NYC date was scheduled for that tour, but they've since added one happening on July 13 at Irving Plaza. Tickets for that show go on presale Thursday (5/24) at 10AM and regular sale starts Friday (5/25) at 10 AM.

Meanwhile, you can catch Killer Mike again this Thursday (5/24) at Brooklyn Bowl.

Videos of El-P, his special guests, and a swaying Santos Party House, along with a list of all dates below...