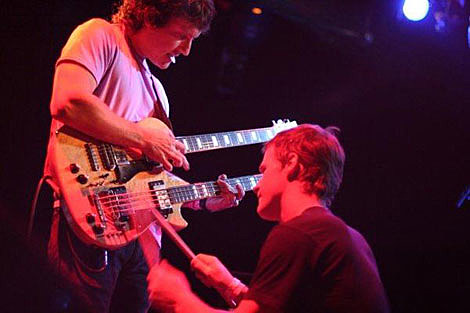 El Ten Eleven is an instrumental/post-rock duo from LA "known for combining guitar/bass doubleneck or fretless bass, with heavy looping and effects pedaling, over acoustic or electric drumming."

"This weekend I had my face melted (a few times actually) down at the Larimer Lounge -- most completely by the duo El Ten Eleven, who were opening for Land of Talk on Saturday night. Kristian Dunn and Tim Fogarty make mindblowing sounds using just a drum set and fretless bass/double-necked guitar.

With the help of about 27 different pedal and whirlygig deals on the floor, they loop layers of sound to create some amazing(ly fun) music. From the initial stirrings of even something like Pachelbel's "Canon in D," I've always found the slow build and denouement in any song to be fascinating, especially ones that focus on adding the layers of sound or noise and then taking them back." [I am Fuel, You are Friends]

Kristian Dunn and Tim Fogarty are also members of the San Diego-based band SoftLightes (who put out an album on Modular). My friend said, "I like El Ten Eleven more than Ratatat!"

Listen to more of their songs at MySpace, including the one "I Like Van Halen Because My Sister Says They Are Cool" (and then compare that song to "Long Time Coming" by the Delays).

Check out El Ten Eleven, TONIGHT, Wednesday November 26th, Thanksgiving-Eve at The Bell House in Brooklyn. The show was originally supposed to be at Union Hall, but was moved so more people could have fun. Castanets, Miles Benjamin Anthony Robinson, and Happy Anarchy are also on the bill.

Asthmatic Kitty is now offering "the entire full-length history of Castanets, from Cathedral (2004), to the haunting First Lights Freeze (2006), to the mystic In the Vines (2007) for just $15. And while supplies last, this bundle also includes a limited edition tour EP split with Shapes and Sizes."

El Ten Eleven are also playing a NYC show on Friday at 927Tribeca with Abigail Warchild. All tour dates and a video below...

El Ten Eleven - My Only Swerving