photo: Elder at Coco 55 in February (more by Greg Cristman) 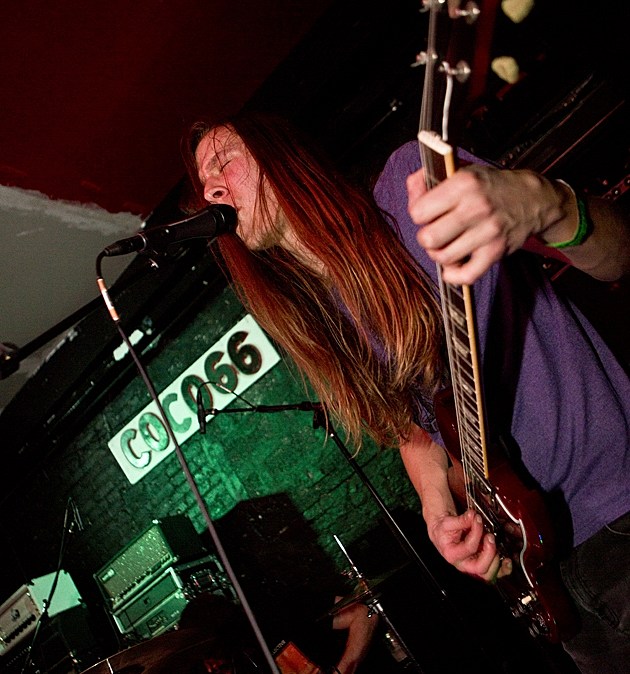 New Bedford, MA metal trio Elder recently put out their third album, Lore, on Armageddon Shop. With five tracks that all pass or near the ten-minute mark, it's the kind of classic doom with endlessly catchy riffs and howling clean-sung vocals that fans of the recent Pallbearer and Crypt Sermon albums (or you know, like, actual classic doom albums) need to check out. Stream it below.

Elder were in NYC not long ago opening Hull's final show, and they'll return for a headlining show on May 5 at Saint Vitus with Kings Destroy, Apostle of Solitude and Clamfight. Tickets are on sale now. Elder's only other announced dates are in Europe, and are all listed below.

That show also doubles as the release show for Brooklyn's Kings Destroy's upcoming self-titled third album, which comes out the same day as the show on War Crime Recordings. It was produced by Sanford Parker (who's recorded Pelican, Nachtmystium, Indian and many others), and so far two tracks are out from it. There's "Mr. O," which combines '70s stoner rock riffs with the speed of that decade's punk bands (or maybe Motorhead) before slowing down into something doomier and bringing in an epic, string-bending classic rock guitar solo. Then there's "W2," a more traditional doom song that makes them a great fit to play with Elder (and the last two bands we caught them in NYC with: Pentagram and Yob). Listen to both below.

Indiana's Apostle of Solitude (fronted by brief Gates of Slumber drummer Chuck Brown) last released Of Woe and Wounds in 2014. They have a few other upcoming dates too, which you can check out with a stream of that album, below.

Apostle of Solitude - Of Woe and Wounds