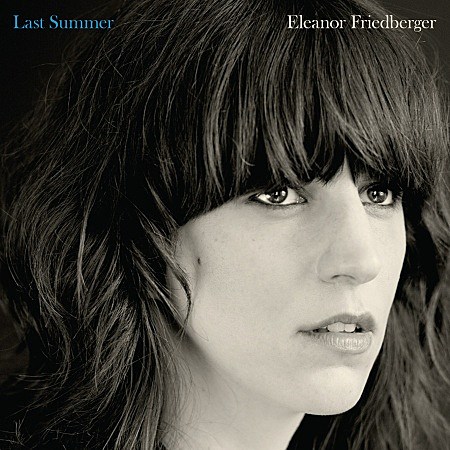 "Eleanor Friedberger is not just the enigmatic mouthpiece of The Fiery Furnaces, one of music's most interesting, dynamic and constantly exciting bands. In fact, Eleanor Friedberger is an exceptional songwriter herself, playing a variety of instruments and crafting the very sorts of choruses that made you fall in love with The Fiery Furnaces in the first place. She's a lover of Led Zeppelin and Jorge Ben; she's a fearless performer, as comfortable fronting a band as she is playing alone on a stage with an acoustic guitar; she's one of the sweetest alto voices in music. Nowhere is all of this more apparent than on her very first solo album, Last Summer, out on Merge Records on July 12th, 2011.

Last Summer, which was recorded, well, last summer, was born out of Take Me Round Again, a collection of cover songs from the previous Fiery Furnaces album. Both Eleanor and Matthew did their own inspired versions of songs they'd written together for their last LP I'm Going Away. Matt's were otherworldly affairs, while Eleanor's were lo-fi and lovely, all recorded in her home, the sound of an artist kicking off her shoes, settling into a big comfy chair with an acoustic guitar, a glass of scotch, and a four-track. She enjoyed the experience so much she decided to move forward with recording songs she had written in her spare time, songs that hadn't been included on any of The Fiery Furnaces' nine incredible albums." [Merge Records]

Download the first single "My Mistake," right over the cover art, above.

Go see the Fiery Furnaces on tour now. The tour kicks off with two NYC shows, tonight (5/4) and Thursday (5/5), at Rockwood Music Hall. Tickets are still available for both. According to someone who works at Thrill Jockey Records (home of the Furnaces), "It'll just be Matt playing the piano and Eleanor singing but they plan on doing simple renditions of as many Fiery Furnaces songs as time will allow! Like most Fiery Furnaces shows, it should be a completely new and unique experience."

The two "Fiery Furnaces" MP3s above are both from 2009 albums that were released via Thrill Jockey. "Keep Me In The Dark", from Take Me Round Again, is Eleanor's cover version of the FF song that first appeared on I'm Going Away. "The End Is Near" is an original track off I'm Going Away.

Eleanor will also be announcing a solo show today via BrooklynVegan.com. Stay tuned for that news coming soon (UPDATE: HERE IT IS. Meanwhile, you can see a list of all FF tour dates, below...