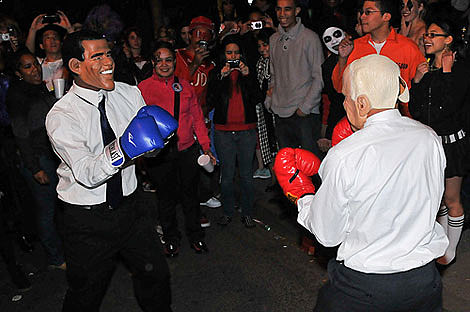 Here are a selection of events happening in New York City on November 4th, 2008.

(le) poisson rouge is hosting a free event with two jumbo projection screens and The Obama Girls of Comedy.

Galapagos (in its new DUMBO location) is having an "Obama-Fabulous Election Night Party". A projection screen and The Yes We Can!-Can Girls. $10.

Sound Fix will be hosting an "Election Night Broadcast Blowout".

The Onion's 'War For The White House Election Night Spectacular' will take place at Fontana's. There will be a big screen, free drinks, and comedy by Todd Barry, Mike Birbiglia, Kristen Schaal and Kurt Braunohler, and Pangea 3000. Free with RSVP. "To RSVP, please email nypromo@theonion.com with 'Election Night RSVP' in the subject. Your name and the name of your guest MUST be included in the body of the email.". This event is now SOLD OUT.

Boog City is hosting an Election Night Extravaganza at Sidewalk Cafe. A group of anti-folk regulars will be performing R.E.M.'s Green album. Free with 2-drink minimum.

The Bell House is having "A Red + Blue ELECTION NIGHT celebration with Eugene Mirman, The Blue Album Group (playing Weezer's Blue Album beginning to end!), and the Red Hook Vendors."

Southpaw will have a big screen and free pizza. $5.00.

Storefront for Art and Architecture is hosting an "Election Night Special - Sleepover at Storefront". "Event begins 6pm. Drinks will be provided while they last - BYO food and sleeping bags. Coffee and croissants from Ceci Cela will be served at 7am."

Jon Stewart and Stephen Colbert are joining forces for an election night special on Comedy Central and "on MTV's 44 1/2 foot JumboTron in the heart of Times Square at 10p EDT on Election Night".

What else? (and don't forget to vote!)