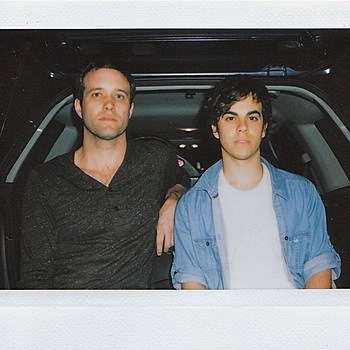 LA-based duo Electric Guest have announced their signing to Downtown Records who will release their debut full length in 2012. You may have never heard of this band, but you probably now their producer. As KCRW said in July:

Danger Mouse (Gorillaz, Gnarls Barkley, Broken Bells, The Black Keys, U2) is at that point in his career where he can do no wrong. At this precious moment, he is the arbiter of what is hip, redefining pop and elevating what might be otherwise esoteric concepts into radio-ready joyrides.

Brian [Burton aka Danger Mouse] came to the project thanks to his longstanding friendship with Jorma Taccone, Asa Taccone [of Electric Guest]'s brother, who is famous for his contributions to The Lonely Island (with Andy Samberg) and their renegade musical sketches on Saturday Night Live (ie. "Dick in a Box"!).

I first played Electric Guest on air at KCRW on May 28 and it was one of those radio debuts that reminded me of how lucky I am to have a platform to share music I love. And standing in the crowd this past Monday, watching the band on stage - and watching Brian watch the band onstage - inspired still another moment of joy and deep gratitude.

Watch the band on stage four times this week in NYC for CMJ. They make their NYC debut (tonight - 10/18) at Dominion (with Penguin Prison, ANR & more), and then continue on to Tammany Hall, Mercury Lounge and finally the BrooklynVegan day party at Public Assembly on Saturday (more details TBA). All dates and some songs below...