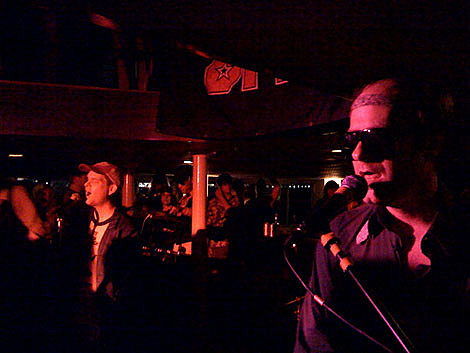 When we left Electric Six last week, they were preparing a new album, KILL, due October 20th on Metropolis Records, and just about to play a boat....

"There's something a little unnerving about being anywhere for hours if you have absolutely no option to leave. So boarding a rock 'n' roll party boat for a three-hour concert cruise might not be for everyone; if you wind up hating the music, getting into a fight with your friends, or feeling violently ill, there's literally no way out until the boat docks.

That element of captivity feels more like a release, though, if you set sail at sunset on the Hudson and the bands are Electric Six, who are out east touring from Michigan, and Les Sans Culottes, the very best faux French retro-rock band in all of Brooklyn. Especially if the boat is named "The Temptress" and has multiple bars and a dance floor (and even if its aroma calls to mind the perspiration of generations past).

Electric Six's "Dick Valentine," the nicest front man who ever moved raving-drunk audience members to perform at-sea body-surfing, said that some people traveled hundreds of miles, some thousands of miles, to be at the show. Screams from the crowd indicated that perhaps it wasn't a joke." [Elle Magazine]

I wouldn't call a 3-hour boat ride a commitment to captivity, but to each his/her own.

Electric Six's post-river cruise plans include a full fall tour, which will feature opening sets by The Gay Blades and Millions of Brazilians. All three will play on Friday, October 16th at NYC's Hiro Ballroom. Tickets go on sale Thursday August 27th at noon. They'll also be in town for a show at Brooklyn's Southpaw on October 18th. Tickets for that are on sale now.

Electric Six bassist Keith Thompson and Zach Curd from The Pop Project recently launched a side-project under the name Desktop. The group's free three-song EP, linked above, shows off a knack for quirky, bedroom-casio-meets-'80s-prom-night electronic disco.

More info on Desktop and all E6 tour dates are below...

"Desktop is Keith Thompson from Electric Six and Zach Curd from The Pop Project.

Desktop is unlike Curd's and Thompson's other projects, meeting somewhere between Stevie Wonder, New Order and 80s Detroit techno. Thompson's thick and driving bass lines and Curd's rich, reverb-drenched harmonies stand out as highlights of their debut self-titled EP. The EP was completely collaborative from the onset, with Thompson and Curd constantly revising each other's contributions, at all times pushing for the goal of a better song. Thompson and Curd developed the recordings completely via the internet, never actually working on anything together in the same room.

With all the ambient, axe wielding, lo-fi experimentalists taking over the independent music limelight, Desktop have created a smart, feel-good breath of fresh air.

The EP is free online. A very limited run of 200 12" inches with letterpressed jackets will be available via Suburban Sprawl Music/Quack Media on September 29th, 2009." [PR]