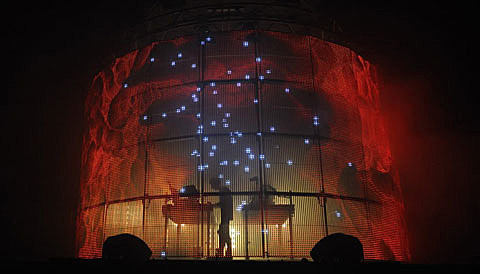 The annual electro fest on Randall's Island, Electric Zoo, begins today, Friday, 9/2, and lasts through Sunday. And though much of the lineup and crowd may scare you (Tiesto is the big headliner tonight), there is also something for everyone. Today's lineup also includes a DJ set by Moby, Rusko, a bunch of Ed Bangers, MSTRKRFT, and what is sure to be a very special set by Richie Hawtin in the form of Plastikman.

Electronic music producer and performer Richie Hawtin returns to U.S. soil with his darker alter-ego PLASTIKMAN. The Berlin-based artist will bring his one-hour live experience that explores the connection between audio, visual and interactivity to Electric Zoo on Governor's Island Friday, September 2. This will mark the debut of PLASTIKMAN LIVE in New York City. Richie Hawtin will also DJ a separate set at Electric Zoo in addition to presenting PLASTIKMAN LIVE on Sunday, September 4.

PLASTIKMAN LIVE was voted the best live act of 2010 by Resident Advisor readers and also was included in U.K. tastemaker magazine MixMag's best live dance act shortlist. Since launching March 2010 at Timewarp in Mannheim, Germany, the PLASTIKMAN show has been under a constant state of evolution helmed by Hawtin and his partners visual architects Derivative and visual designer Ali Demirel.

There is also a customized iPhone/iPod Touch application called Plastikman SYNK. Conceptualized by Hawtin and developed with RJ Fischer (http://hexler.net) and Bryan McDade (Minus), SYNK is available for free and is the official companion iPhone/iPod Touch application of the current PLASTIKMAN LIVE worldwide tour. SYNK users will participate in an experiment in audience-performer interaction aiming to blur the lines of perception and participation.

PLASTIKMAN LIVE is a fully immerse real-time interactive concept experience. It is the only show where the entire event has been created from the ground up with the artist (Richie Hawtin/PLASTIKMAN) spearheading each part of the development and vision. There is one performer--Richie Hawtin aka PLASTIKMAN--on stage employing the cutting edge and custom technology to control the entire audio/visual and lighting experience, with live real-time generative visuals (no timed coded pre-rendered video or movies) in connection with cutting edge Derivative TouchDesigner software, live control over DMX-controlled lighting (custom Ableton Live Midi>DMX solution), and real-time audience/performer interaction and communication with the custom iPhone SYNK App (The only live concert that allows the audience to control part of the show, HUD readouts, audience/performer chat client, live on stage camera feed, etc.).

"I'm very excited to bring my PLASTIKMAN show to Electric Zoo," states Hawtin. "I am very energized by the incredible developments in the electronic scene in North America, and finally we're seeing the underground movement that I represent with my label, artists, DJing and live shows being acknowledged by the big events and festivals. This is a great moment in American music history, and I am delighted to have a platform to present my take on where electronic music is today and my vision for its future."

Tickets are still on sale. Set times are all HERE.

SBTRKT, who DJs twice tonight at the similar North Coast Music Festival in Chicago, DJs Electric Zoo on Saturday (despite what his posted tour dates say)

A Plastikman video below...