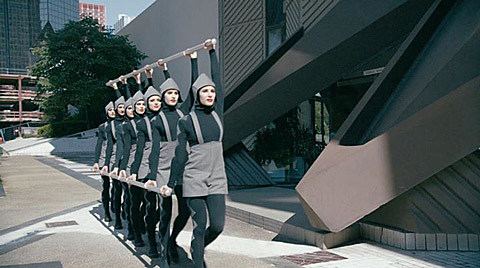 The Chemical Brothers' official new single from the upcoming Born in the Echoes LP is "Go," featuring their old pal Q-Tip who also was on their 2005 single "Galvanize." They've also reteamed with another old friend -- director Michel Gondry -- for the song's music video. (Gondry, you may remember, made the prismatic, mindbending "Let Forver Be," as well as the more subtle but no less fascinating "Star Guitar" video. Watch those below.) For the "Go" video, Gondry goes back to multiplicity with a group of clone-ish looking dancers connected together, marching around some quasi-futuristic corporate industrial complex. (It reminds me of The Apple for some reason, but it's not that good. Nothing is.) You can watch it below.

In other news, Chemical Brothers will headline the 2015 edition of NYC's Electric Zoo Festival which has been...Transformed! Meaning it's now officially called Electric Zoo: Transformed. They're "planning a new site layout, new stage designs, and much more." It's happening at Randall's Island over Labor Day Weekend (September 4-6). The other announced headliners are Alesso and Above & Beyond, and Cashmere Cat, The Glitch Mob, Gramatik, Zeds Dead and a few more artists are confirmed, with many more TBA. Tickets are on sale.

Updated Chemical Brothers tour dates are listed, along with those videos, below...