a scene from The Molly 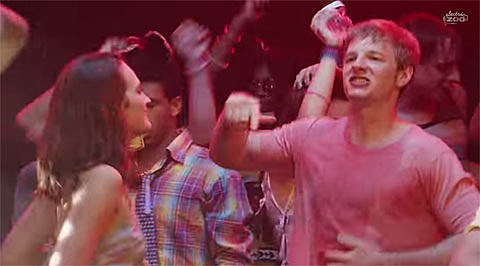 EDM festivals can't catch a break lately. Every week there seems to be another overdose story in the news, including last week's news that a drug dealer was arrested in connection with deaths at the NYC Electric Zoo fest in 2013. Despite the setbacks, Electric Zoo is returning to Randall's Island this year, but with heightened security and new education measures which now include a campaign called "Come To Life":

"Come To Life - or CTL - is about rolling life, not face. It's about not missing one moment of the lights, the music, the celebration. It's about connecting with music lovers from around the world who've come together to experience the time of their lives. It's about being present and making the right choices. Every moment of Electric Zoo is for you - don't miss any of it!"

They go on to say that "Electric Zoo strongly advocates against the use of drugs", and there's a PSA video called "The Molly". Watch that and read the press release below...

NEW YORK, NY (August 4, 2014) -- Made Event, the promoters of electronic dance music (EDM) concerts, including one of the world's most popular three-day EDM festivals, Electric Zoo, today announced the launch of its "Come To Life" communications micro-campaign. The campaign encourages attendees to organically enjoy the amazing sensations produced by one-of-a-kind light shows, the best electronic dance music and the incredible energy of the crowds.

At the heart of the campaign is the message that concertgoers don't need to do drugs--particularly MDMA, often referred to as Molly or Ecstasy--to enjoy the festival. The campaign is intended to make fans think about the potential negative consequences of "dropping" Molly and to avoid those risks.

"Our message to concertgoers is simple: The Electric Zoo experience is exceptional and worth being present for," Made Event founders, Laura De Palma and Mike Bindra, said in a joint statement. "Molly can cause you to not only miss the moment, alienate your friends and have an overall adverse and unpleasant experience...but can also make you sick and can even be fatal. Fans will experience how great it is to 'Come To Life' at our concerts from lights, sounds and crowds," the statement continued.

The centerpiece of the campaign is a two-minute video called "The Molly" which all concertgoers must view in order to validate their wristbands to gain entrance into the Electric Zoo festival, to be held August 29-31 at Randall's Island Park in New York City. Emmy Award-winning writer and creator of the TV series Dexter, James Manos, Jr., created, wrote and directed the video alongside his 19-year old daughter, Ellie Manos. "Ellie represents the target audience and she's been to EDM concerts and seen the behavior of her peers on Molly. She was the perfect partner to help me write the spot," the elder Manos said. "This is a really interesting and volatile time of life for teens and young adults, and I was up for the challenge of crafting the right tone, manner and overall approach to creating a PSA that would have a net positive influence in their behavior and lives, in an entertaining and authentic way," Manos added.

Many EDM concertgoers who take the drug believe that it will enhance their concert experience--at various concerts throughout the world, this has resulted in serious health emergencies and even death. Made Event believes the "Come To Life" campaign will help its younger fans (18-to-24 year olds) make responsible choices when it comes to having a good time and making decisions about drug use at Electric Zoo and other events.

"The Molly" video will be available for general public viewing the week of August 4, 2014, when the "Come To Life" campaign officially launches. The campaign includes a digital and social media communications effort in partnership with the festival headliners who will tweet messages aligning with the umbrella campaign.