"Sunn 0))) blew the power to the Masonic temple. Everyone's running around trying to fix it. Having punk rock show flashbacks". -americab 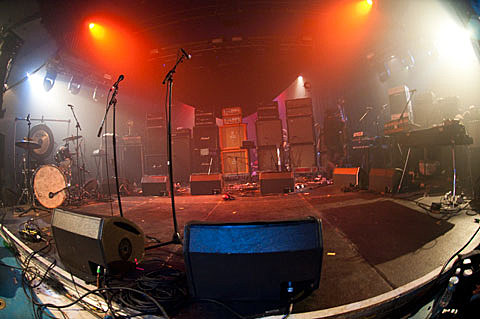 After sets from Jesse Sykes & The Sweet Hereafter and BXI, two songs into last night's (9/7) sunn O)))/Boris set at Brooklyn Masonic Temple, the power blew. With the heat sweltering inside the venue and the Brooklyn Masonic staff scrambling to fix the issue, a number of people from the audience decided to hit the road. The venue later fixed the issue, and sunn O)))/Boris played in complete darkness to conserve power. Reportedly the police then showed due to noise complaints, but according to one attendant, "Saw the cops, but can you shut down a show that's already over? Or did someone give Sunn and co. the signal to stop? Either way I don't think anyone noticed. Shit was excellent." Stay tuned for more info.

UPDATE: The noise did get the police there, but they didn't shut it down.

Hopefully the power won't buckle tonight at Sleep at BMT (all went well Monday night) (and by the way, tickets will be released at the door) or at the sunn O)))-curated Roadburn 2011 with the newly added Pentagram and Swans. Swans will also play Masonic Temple on October 8th, tickets are still on sale. Their Bowery Show the next night is sold out.

BXI sat down with someone for a video interview 2 days ago (right after ATP). In it, the interviewer says that people called the last sunn O))) show at Masonic Temple, "the loudest they ever heard". You can watch that below...