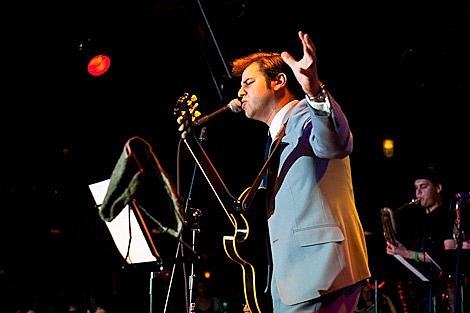 Tickets are on sale for the recently-added Neon Indian show at Brooklyn Bowl.

Soul man Eli "Paperboy" Reed is playing a show at Brooklyn Bowl on Saturday night (11/21). Tickets are on sale for that too. Eli, who also plays in Salem, Massachusetts tonight (11/20), was supposed to hit DC on the 22nd, but that's been cancelled "due to some logistical problems".

Jacob Blickenstaff took the picture of Eli you see above. If you happen to be in Memphis, check out his pictures on display at the Stax Museum of Ameican Soul Music.

Speaking of BV photographers with cool other projects, Justina Villanueva just released the first issue of her own magazine. Check out her recent photos from Jesus Lizard at Irving Plaza too.

Sunday is the Talib Kweli show at Brooklyn Bowl. Tickets are still on sale. It's one of three shows Talib will play in the city before the end of the year.

Other shows coming up at Brooklyn Bowl with tickets on sale include Julian Plenti, Dr. Dog, and Dangerous (All Metal Tribute to Michael Jackson). Dangerous also opened for Deer Tick there on Halloween.

It's been a year since Eli performed on Jools Holland. The video from that performance is below...