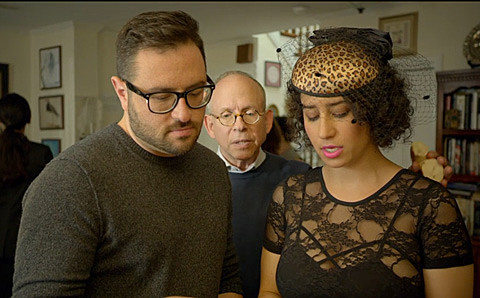 This week's very funny episode of Broad City featured the first we've seen of Ilana Wexler's brother, Eliott, who sings at their grandma's Shiva. Eliott is played by Ilana Glazer's real-life brother Eliot Glazer who, you may know, brings his classically-trained pipes to his live show "Haunting Renditions" where he takes some of pop music's most infamous songs and turns them into highbrow, sweeping ballads. The next edition of "Haunting Renditions" happens at Littlefield on February 20 and features guests Dave Hill and Marnie the Dog. Tickets are on sale now.

Tonight (2/6) at the Bell House, Eliot Glazer will be one of the guests at storytelling game show "The Shame Game." Other guests include Late Night with Seth Meyers' Michelle Wolf, Phoebe Robinson, plus hosts Ginny Leise and Soojeong Son. Tickets are on sale.

Speaking of Dave Hill, his next edition of "Meet Me in the Bathroom and Tell Me All Your Secrets" happens at Union Hall on March 6. Guests include Aparna Nancherla, Mrs. Smith, and Bandits on the Run, and tickets are on sale.

In other notable comedy/variety show news, the next edition of "Running Late with Scott Rogowski" happens at UCB Chelsea on February 11. Guests for this one: former SNL castmember Kevin Nealon and daytime talk show legend Jerry Springer. Tickets are on sale now.