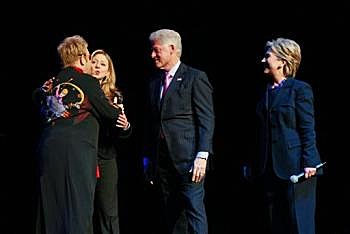 Experience is central to Democrat Hillary Rodham Clinton's presidential bid, and Wednesday night she tapped one of pop music's most venerable rockers to help fill her campaign coffers with $2.5 million. Elton John, who has sold records and filled arenas for four decades, played a benefit concert for Clinton at Radio City Music Hall.

"I've always been a Hillary supporter," John, 61, said before launching into his 1970 breakthrough hits, "Your Song" and "Border Song." "There is no one more qualified to lead America."

The English singer, composer and pianist added: "I'm amazed by the misogynistic attitudes of some of the people in this country. And I say to hell with them .... I love you Hillary, I'll be there for you." [AP]