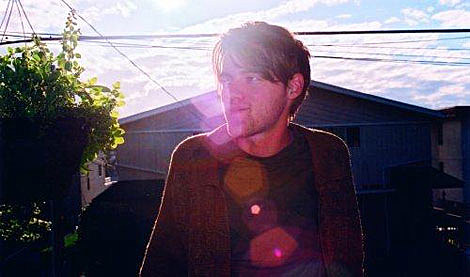 "I sort of decided that I wanted to do something that I hadn't done before, or at least not since I was a teenager," said [Eluvium/Matthew Cooper]. "I wanted to work more in the pop space and to use lyrics as an instrument."

Cooper went back to work, scrapping the album he'd been working on and creating a new set of songs, this time with words...Cooper has been calling Similes a pop record since he finished it. His label people tell him not to, that this is misleading, that in the market pop means something entirely different than these ethereal songs. But Cooper remains stubbornly attached to the label. "Oddly, I kind of feel that I have yet to make a record that isn't a pop record," he said. "I listen to what I've been doing with ambient and noise and drone and textural stuff and relative to what I was usually influenced by, like Stockhausen or Steve Reich or John Cage, it just seems so much more pop. There are chord changes and melody. It's really not that far from the concept of pop music."
[Pop Matters]

The new record from Portlander Matthew Cooper aka Eluvium, Similes, out now on Temporary Residence (the same label The Books signed to for their new LP, The Way Out, due in July). Eluvium is going on tour for the month of May, and about half of those shows will be with another dreamy, textured solo band, Brooklyn's Julianna Barwick. They play (Le) Poisson Rouge on Wednesday, May 19th. Tickets are on sale.

Julianna recently signed to Asthmatic Kitty. Her debut on that label will be out in 2011. She's expected to release another record too, a collaborative album put together with previous tourmates Roberto Lange (Epstein and Helado Negro) and Jonathan Dueck. Her debut, Sanguine, getting a vinyl re-release on M'Lady's in June. And the song above is from her recent Florine EP.

Videos of Elivium songs from the new record and all tour dates are below...