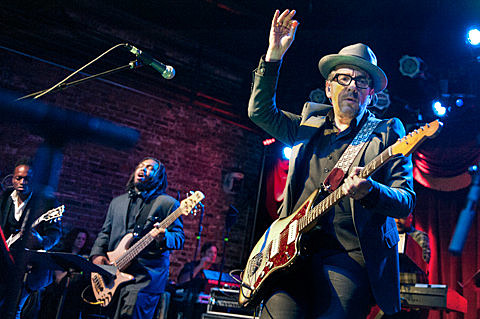 Last year, power pop veteran Elvis Costello and alternative rap band The Roots teamed up for a collaborative album, Wise Up Ghost, which they celebrated with a live show at Brooklyn Bowl. Now the pair have announced more dates together, including the two-night opening party for Brooklyn Bowl Las Vegas and another NYC-area show on March 12 at The Capitol Theatre in Port Chester, where Elvis recently played two nights on his solo tour. Tickets for the Cap show go on sale Friday (1/31) at noon.

The Cap show is four days after Elvis Costello & The Imposters play Caesars in Atlantic CIty (3/8). There's a few tickets left for that show.

Meanwhile, The Roots are playing a Super Bowl show tonight (1/30) with Run DMC and Busta Rhymes, which will stream live on Rolling Stone.

All dates are listed, along with a video from Wise Up Ghost, below...