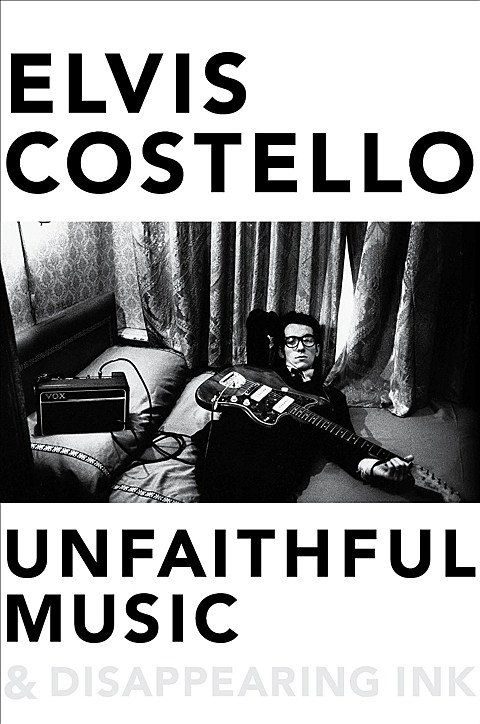 Elvis Costello will release a memoir this year, titled Unfaithful Music & Disappearing Ink and due out October 13 via Penguin (pre-order). Here's more, via Penguin's description:

"Unfaithful Music" describes how Costello's career has somehow endured for almost four decades through a combination of dumb luck and animal cunning, even managing the occasional absurd episode of pop stardom.

The memoir, written entirely by Costello himself, offers his unique view of his unlikely and sometimes comical rise to international success, with diversions through the previously undocumented emotional foundations of some of his best known songs and the hits of tomorrow. The book contains many stories and observations about his renowned co-writers and co-conspirators, though Costello also pauses along the way for considerations on the less appealing side of infamy.

Elvis will be in NYC to celebrate it on October 13 at Barnes & Noble Union Square and November 10 at BAM, where he'll be in conversation with Rosanne Cash. Tickets for BAM are on sale now. To get in to Barnes & Noble, you have to pick the book from a B&N location. More info here.

Speaking of musicians with book events in NYC, here are a few more. Sleater-Kinney/Portlandia's Carrie Brownstein will celebrate Hunger Makes Me A Modern Girl on October 28 at Barne's & Noble Union Square. You have to pick up the book from a B&N location to get in. More info here. S-K are also touring, including five NYC shows in December.

The Mountain Goats frontman John Darnielle will be here for a discussion/signing of last year's Wolf In White Van book, which was recently released on paperback. It happens September 1 at Strand, and to get in you have to pick up the book or a $15 gift card from Strand. More info here. He'll also introduce a screening of Pier Paolo Pasolini's Medea on August 31 at Lincoln Center, followed by a book discussion and signing (tickets). Mountain Goats are also touring again later this year. No NYC shows, but all dates are listed here.

New York's St. Joseph's College is hosting a series of "literary presentations and discussions" this fall semester that includes a couple musician-authors. One is the previously discussed appearance by Patti Smith (one of three NYC dates on her book tour), and the other is Throwing Muses' Kirstin Hersh in support of Don't Suck, Don't Die: Giving Up Vic Chesnutt, her book about her friendship and past tours with Vic Chesnutt. That one takes place October 21, and Kristin will be in conversation with author/music journalist Amanda Petrusich (NY Times, Pitchfork, etc). Full schedule and tickets for all shows here.

Amanda Palmer, who is about to have a child, is making one more NYC appearance before then at the New York Public Library on Thursday (8/20) at 6 PM. It actually takes place outside the library, it's free, and will include a children's book drive as well as a performance from Amanda. She writes:

PLEASE bring a children's book (or more than one!) to donate to the NYPL's early literacy program. the performance is in part a book-drive to get books to kids (and their parents) who don't have access. please make sure the books are new (they can't accept used books due to mold, etc).