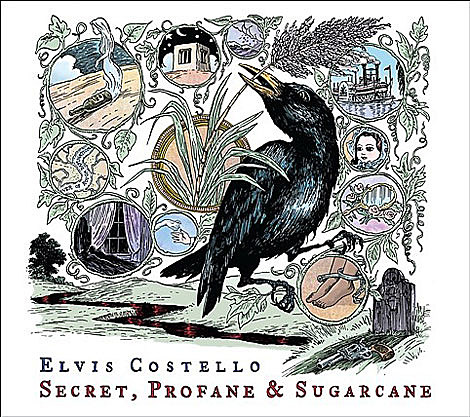 The record was produced by T Bone Burnett and recorded by Mike Piersante during a three-day session at Nashville's Sound Emporium Studio.

Several of these songs, including "Down Among The Wines and Spirits", were given their first public performances during Costello's acclaimed solo appearances as part of "The Bob Dylan Show" in late 2007.

....Select US tour dates featuring musicians from the album -- dubbed "The Sugarcanes" -- will follow in June and August, 2009.

Elvis Costello has announced some of those June tour dates including June 9th in Red Bank, June 10th at the Beacon Theatre in NYC, June 13th at Bonnaroo, and June 19th in Telluride, Colorado for the Telluride Bluegrass Festival. Tickets for the NYC show go on sale Friday.

"Due to the division of the music over four sides, the vinyl edition will contain two additional tracks, a arrangement of Lou Reed's "Femme Fatale" and Costello's sequel to the old Appalachian murder ballad, "Omie Wise", entitled, "What Lewis Did Last".

Beginning June 2, 'Secret, Profane & Sugarcane' will be available at participating Starbucks company-operated locations in the U.S. and Canada and wherever music is sold."