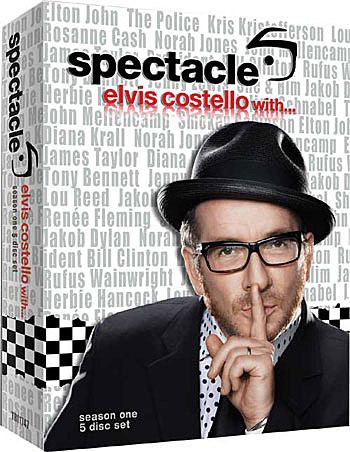 "Sundance Channel will premiere the second season of its critically acclaimed music/talk original series "Spectacle: Elvis Costello with..." on Wednesday, December 9, 2009 at 10:00pm et/pt. "Spectacle: Elvis Costello with..." combines the best elements of talk and music television and lets viewers in on intimate conversation and performance with host Costello and his guests ranging from legendary performers to promising new artists...

"We're thrilled to launch a second season of 'Spectacle' on Sundance Channel," said Sundance Channel EVP and GM, Sarah Barnett. "The series offers viewers unprecedented access to artists through its mix of candid conversations and exciting musical performances. This season's A-list line-up is a testament to the level of respect that artists feel for Elvis Costello as a musician and entertainer."

"I am delighted that we can continue where we left off--making intelligent, and informative music programming," said Sir Elton John, one of the series' executive producers.

Meanwhile, the first season of Spectacle is coming out on DVD ("in standard DVD and Blu-Ray formats"). And to promote that, Elvis will be appearing at Barnes & Noble Tribeca on Tuesday, November 17th, which is the same day the DVD is released. "Fans will have the opportunity to meet Elvis Costello and get their DVD or Blu- Ray copy signed by him." I guess no performance. His only upcoming date at the moment is Wilkes Community College's MerleFest in North Carolina on May 1, 2010.

A clip of Elvis talking to Smokey Robinson, below...