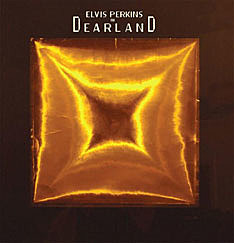 Elvis Perkins In Dearland has added a Wednesday, May 20th Brooklyn show at the Bell House. Tickets are on sale.. The band's extensive US tour also includes the previously reported, and much sooner, March 25th Bowery Ballroom show (tickets still on sale), and two official SXSW shows. All dates below.

Elvis Perkins In Dearland's new self-titled second album (pictured above) (twice) is out on XL this week, and is still on sale at Amie Street as an $8 digital download (with $2 of that going to Clearwater, a Hudson River-conservation nonprofit founded by folk singer Pete Seeger). Speaking of Clearwater, they're hosting a Jeff Tweedy solo show on March 28 in Beacon, NY as part of its annual Spring Splash fund-raiser (tix).

Perkins recently visited The Gold Room Sessions to cut videos for two of the new record's best tracks - the free-associative slow-roller "Shampoo" and celebratory dirge "Doomsday". Both of those videos, and all tour dates, below...