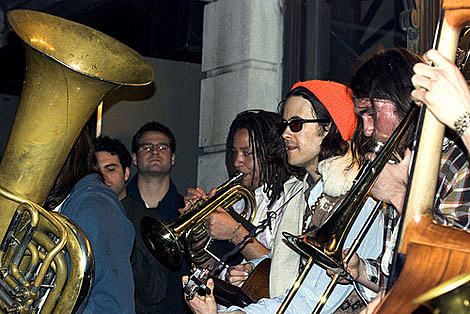 Elvis Perkins in Dearland played the Bowery Ballroom in NYC Wednesday night (3/25, review below). The show was not long after he got back from SXSW, and he will next visit Europe before touring North America in April & May. That tour ends with a May 20th show at Brooklyn's Bell House. Tickets are still on sale.

Perkins and band are also on the just-announced bill for the annual Clearwater Festival, June 20th and 21st at Croton Point Park in Croton-on Hudson, NY. Other performers include Arlo Guthrie, Old Crow Medicine Show, Susan Tedeschi, Alejandro Escovedo, Pete Seeger, AC Newman, and Dr. Dog. Tickets are on sale now - they cost (until May 20th when prices go up) $50 for a single day, $75 for a weekend pass, and $115 for the weekend with camping included. Full lineup below.

The Festival is a fundraiser for the Hudson Valley environmental group Clearwater, who is also hosting Pete Seeger's 90th birthday concert happening at MSG on May 3rd (where I'm told, Pete will play a one-song set that "everybody knows the words to"). Tickets for that event are on AmEx presale, and go on sale to the general public on Monday, March 30th at 9am.

To get back to Elvis Perkins, the Bowery Ballroom show began with avant-street-band Himalayas descending from the venue's balcony and ended with Perkins and friends emerging from the soapy depths of the Bowery JMZ station. It all started with...

Himalayas, led by drummer Kenny Willeson and saxophonist Jonathon Haffner, on stage with more than a dozen musicians. I walked in to the middle of their set to see the band's wall of horns following the exaggerated cues of its leader who, for the moment, was strapped to a marching bass drum. The assorted instruments sounded through the venue like a New Orleans second line band, with soloists sporadically breaking into improvised melodies and jazz licks.

To end the set, the band marched from the stage to the venue's balcony (the reverse of how they started I'm told) - the single file line gave the crowd an isolated burst of the group's musical pieces, revealing a bit about how the slightly-out-of-tune horns all unified on stage into one emotive sound that seemed to come from a distant hilltop.

Elvis Perkins took the stage in sunglasses and a dayglo orange beanie, face wrapped tightly behind a white scarf. Having grown a stringy, unkept head of hair, Perkins looked nothing like the clean-cut guy in the press photos and Ash Wednesday tour pics. The set of mostly new-album songs included highlights "Shampoo" and "I Heard Your Voice in Dresden" early on, making the back end of the night drag with the soft mumble of Perkins's balladeer voice and the pitched clonk of drummer Nick Kinsey's bass drum (which seemed from where I was standing to overwhelm the rest of the band's sound, notably the upright bass). A few songs in, Kinsey leapt out from behind the kit to pound a marching kick drum, where his revelry lifted Perkins' mostly reserved stage demeanor.

During fourth song "Chains, Chains, Chains," members of Himalayas came out to accompany the band on horns, a repeating occurrence throughout the set. On the other end of spectrum, the stripped-down harmonies of quiet spiritual "Weeping Mary" showcased Perkins and the core group's excellent grasp of atmosphere and mood, with a sound that filled the at-times-noisy room with enchanted echoes.

The set closed with "While You Were Sleeping" and the band came out for encores "All the Night Without Love," "How's Forever Been Baby?" and closer "Doomsday" - which didn't really close the night, as the band, bolstered by half a dozen Himalayas members, processed through the receding crowd into the street, playing in front of the Bowery for a while before moving down the soapy steps of the Bowery JMZ station. MTA employees, delighted by the idea of a group of musicians walking through their foam covered entry way, watched as the band played a raucous group improv session underground, then emerged on the other side of Delancey Street, followed by cameras and a crowd of about 40, to play for a few more minutes before calling it quits and disappearing down the bridge-lit road.