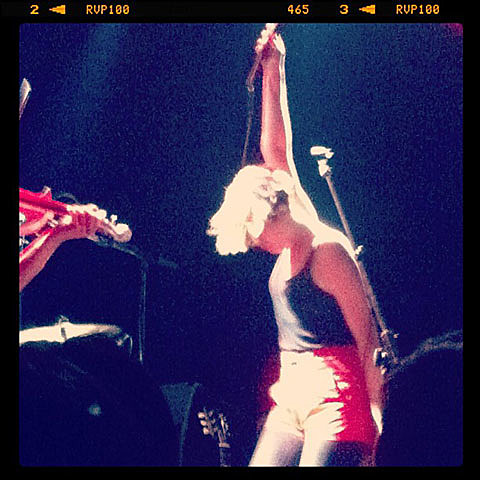 "Okay, who wants this song dedicated to them?" asked Erika M. Anderson (aka EMA) at her MHOW show this past Friday (3/16) before going into the dark, intimate "Marked." When she got to the song's refrain ("I wish that every time he touched me left a mark"), you couldn't help but wonder if any audience members were secretly taking back their cheers of "ME!" from about a minute earlier. But that mood shift is exactly the kind of vibe that was in place throughout EMA's entire show. She would constantly switch back and forth between playful stage banter and dance moves to the no-bullshit rawness and sincerity of her songs and lyrics.

But before EMA took control of the venue, the crowd was greeted by an opening act, her tourmates, Vancouver's Nu Sensae. I'd never heard the Vancouver trio before Friday night, but was pretty impressed by their punky noise rock, all of which was delivered in 2-3 minute blasts. Vocalist Andrea Lukic rotated between breathy Kim Gordon-esque vocals and a piercing scream, while Daniel Pitout beat the hell out of his drums and guitarist Brody McKnight built a shoegazey wall of sound.

Up next were Brooklyn's Talk Normal, who I last saw when they opened for Sonic Youth at Prospect Park in 2010. It goes without saying that MHOW is a better venue for them and that they've only gotten better/have played tons of shows in the last two years, but regardless, I was far more impressed by them on Friday than I had ever been before. Like Nu Sensae and EMA, they're well versed in noise rock, but with a much heavier emphasis on no wave. Their stage setup was lit only by two red light bulbs, which made for a great gloomy setting to their spacious sound. And though no wave is the band's obvious reference point, it's tough to simply leave it at that, as their vocal interplay and dynamic shifts stretched beyond the confines of the genre.

After Talk Normal had exited the stage and it was set up for EMA, all of the band members except Erika stood before MHOW's crowd, lit only by dim, hanging lanterns that the band had brought with them. Electric violinist Leif Shackelford then began the eerie violin drone of "Stand and Encounter," the last song released by Erika's former band, Gowns, directly before their break up. Eventually Erika walked on stage to huge applause from the crowd, and taking solely to the mic, began delivering the song's stream-of-consciousness lyrics. This was followed by the EMA b-side, "Angelo," an upbeat cut for which she sounded more than a little like Karen O.

Erika picked her guitar up after the first two songs for the first Past Life Martyred Saints (which she played all of) track of the night, "Anteroom." Past Life Martyred Saints had always struck me as somewhat of a folk album, if not a noisy, perhaps more anti-folk version of one, but in the live setting I lost all notions of that and saw the band harnessing the spirit of crunchy '90s alt rock. When they played "Butterfly Knife," which barely has drums on the album version, I actually saw audience members headbanging to the revved up version of the song. And even more so than they were when the band played their cover of Danzig's "Soul on Fire" during the encore.

The highlight of the night came during the 7+ minute "Grey Ship," for which the venue's disco ball was turned on, making the song's slow first half feel like the song a '90s high school prom movie band plays after most people have left. At the song's halfway point, the band got increasingly heavier and more locked in, bringing in sludgy guitar, electric violin riffs, elaborate drumming, and eventually the band's synced up drum/guitar punches that were met with tons of applause from the crowd. EMA came close to reaching that same level of intensity during the last song of their pre-encore set, "California." She moved around on stage with as much of a don't-give-a-fuck attitude as she's got in the lyrics, punching out one of those lanterns with her mic and ending the song in the same frozen pose she makes on her album cover.

During the encore, Erika brought out Daniel from Nu Sensae to play seemingly impromptu cover songs. She said, "This is for YOU, not the blogs, don't tell anyone about this!" so in respects to that, I'll stop here. But maybe the songs they covered are listed as part of the setlist below...

More pictures, video and setlist from the show below...