photo: EMA at Bowery Ballroom in 2014 (more by Amanda Hatfield) 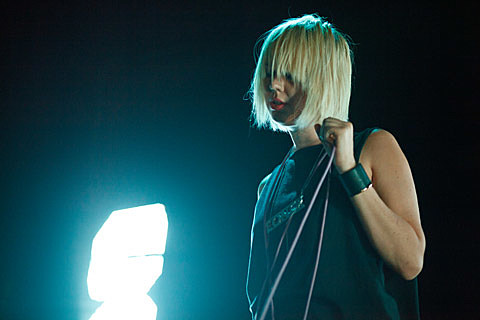 EMA, who released one of our favorite albums of 2014, will be returning to NYC in February to present her new project, I Wanna Destroy, at MoMA PS1 on 2/15, part of the venue's Sunday Sessions. Here's more details:

I Wanna Destroy is a Virtual Reality environment built in collaboration with Portland-based developer Zach Krausnick and the software company Chroma. This virtual world uses 3D game mechanics to articulate experiences not often explored in mainstream gaming; including guilt, nostalgia, family, and transcendence. Audience members explore a changing 3D environment, while their experiences are projected before the entire audience. EMA providse a live score, working to meld semi-acoustic instruments and lyrical content into a digital world.

It's her only announced date at the moment. Tickets are on sale now.

Watch a video of EMA playing A Take Away Show below...