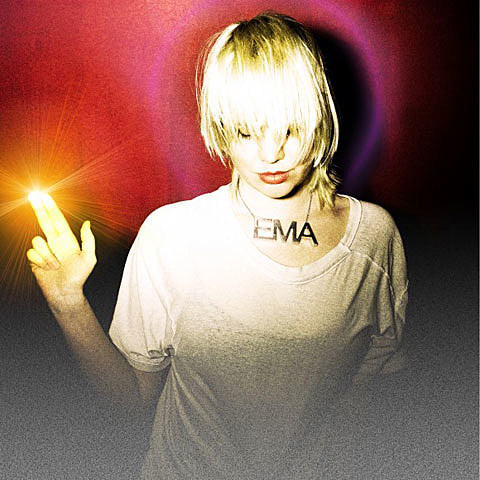 Dale Earnhardt Jr. Jr. kicked off a tour in Allston, MA last night (5/10), and are now in NYC for that previously-mentioned May 11th show at Mercury Lounge (sold out), and for a show on May 12th at The Rock Shop (tickets available). Both shows are with Generationals, as are most of Dale's May dates (but not at the one they're playing for kids on Sunday).

In June, Dale Earnhardt Jr. Jr. hook up with EMA for a run of West Coast dates. Who is EMA? Well, to quote the 8.5 Best New Music she just got on Pitchfork,

"Erika M. Anderson has talked about finding "true bliss and terror" in the live performances of her former band, Gowns. The pressure-cooker atmosphere she and her partner in that group (and in life) Ezra Buchla immersed themselves in had to crack at some point, and it did, fatally and finally, at the beginning of 2010. Anderson's way of propping open an escape hatch from the bruised purging of Gowns was to retreat into herself, by gathering her collective musical ideas and putting them out under her own initials. But it's immediately apparent on hearing Past Life Martyred Saints, her debut full-length as EMA, that she's still all tangled up in "bliss and terror.""

That album, originally scheduled for a June release, is out now via Souterrain Transmissions. Grab "Milkman" from that record above. Watch the video for "California" from the LP below. Listen to her cover of Danzig's "Soul On Fire", which is going to be released as a 7-inch by Hell Yes! later this month (and is on iTunes now) also below.

Dale Earnhardt Jr. Jr.'s full-length album It's A Corporate World is due June 7 via Quite Scientific Records. All of their, Generational's and EMA's tour dates, below...

--
Dale Earnhardt Jr. Jr. - Nothing But Our Love