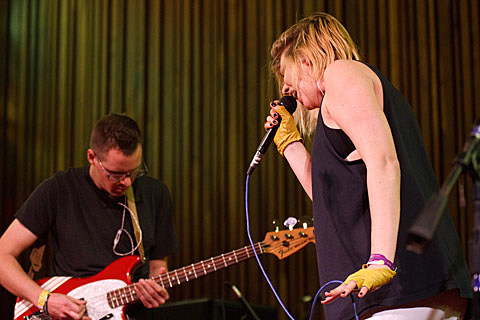 EMA already released the first three tracks of her new record, The Future's Void (due out 4/8 via Matador), and she's now made the entire album available to stream ahead of its release date, at NPR. Each of the three singles showed a different side of The Future's Void, but it's really one of those albums that need to be listened to straight through. The fourth song, "Cthulu," is one of my favorite songs this year by an artist, the kind of song that always makes me stop what I'm doing and pay attention when it comes on. Other tracks revisit the industrial sounds of lead single "Satellites" ("Neuromancer," "When She Comes"), and if you liked the melancholic "3Jane," you'll likely dig "When She Comes," "100 Years" and the comedown closer "Dead Celebrity."

As discussed, EMA plays a record release show in NYC on April 11 at Union Pool. When we last spoke, there was no ticket info posted for that show, but it's since been announced that the only way to get in is to purchase The Future's Void at Other Music, Rough Trade NYC, Permanent Records, or Academy Records starting Tuesday, April 8.

Her tour with Downtown Boys (who you may have caught yesterday [3/30] at MoMA PS1 with Priests) hits NYC on April 25 at Mercury Lounge and May 9 at Rough Trade. Tickets for both of those shows are still available.

Updated dates, along with streams/videos of those 3 singles, below...