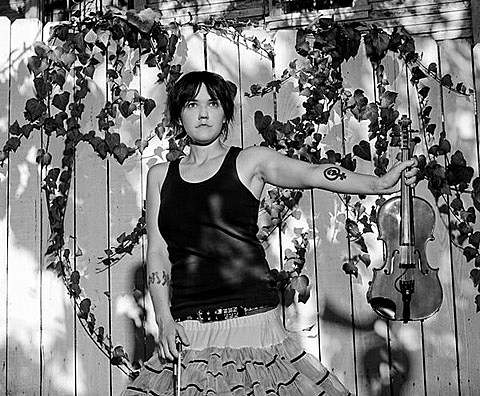 "The best musical news of the year is that Emily Wells moved to the East Village. On the east side of Tompkins Park, 9th Street is quite and peaceful, and that's where she moved. At least I imagine that's where she moved. Wells is so musical and energetic, I imagine she needs some tranquility to even herself out. I want to take her brain, project it on the building next door from my rooftop and enjoy her whole soul."
[Serial Optimist]

Weather reports indicate that tonight's snowfall in NYC won't be the whopper that the last snowstorm was, so making your way down to City Winery TONIGHT (1/7) SHOULD be a snap (the city may find a way to fuck it up anyway). It's there that Emily Wells, Portland Cello Project, Live Footage, and Henry Wolfe will team up for a show, a one-off APAP Showcase for all parties. Tickets are still available.

Emily Wells's impressive violin compositions won't be exclusive to City Winery though, as she has already announced a residency at Ace Hotel that will see her perform free shows every Sunday in February, AND a show with Anni Rossi at Southpaw this Wednesday (1/12). All tour dates are with some videos of Emily below.

Some of those Emily Wells dates will see her supporting My Brightest Diamond who separately plays the Time Warner Center in NYC on 1/27 as part of the 2011 Americana Songbook Season. There are other MBD dates too, and they are listed below too.

Alt-classical/alt-Cello band Portland Cello Project recently dropped their new LP Thousand Words (you can pick up a copy at their site)...

"PCP is known for tailoring their song choices to the collaborators who join them. Second only to the cello, collaboration is one of the group's defining features. The group has recorded or performed with Laura Gibson, Hurtbird, 3 Leg Torso, Horse Feathers, Thao Nguyen, The Builders and the Butchers, the Decemberists, and many more local and national artists, and has created their own renditions of artists from ABBA to Beethoven to John Williams to Justin Timberlake.

[A recent show's] list of collaborators will included the same high caliber of Portland-area artists: The Corin Tucker Band, Typhoon (of whom Jenkins said, "I really just don't understand how they aren't world famous by now," though recent features on KEXP shouldn't hurt their chances of world fame), Golden Bears, and the recently OMN-profiled PHAME Academy Choir." [Oregon Music News]

PCP's tour dates, as well as My Brightest Diamond's and Emily Wells's, are below alongside some video..

--
Symphony 1 In the Barrel of a Gun - Emily Wells