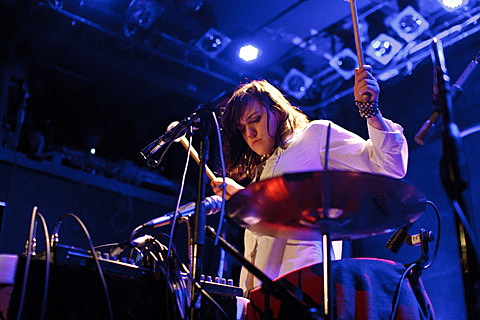 Emily Wells released Mama Remixed, which takes her entire album, Mama, from earlier this year and gives it a new spin. Says Emily:

I couldn't be more excited to announce the release of "Mama Remixed". In collaboration with 13 artists, each song from the record has been remixed and a few of them twice! With contributions from Lemonade, Jeremiah Jae, Ed Rodriguez of Deerhoof, Kid Koala, Dan the Automator, Live Footage, Timmy Straw, The Blow... (just to name a few), I'm honored to be in such good company.

I hope you'll enjoy these and spread them around. We wanted to make something special to explore these songs further and to thank you for being so good to me and supporting my work.

You can download Mama Remixed for free above or stream it below. Emily is also out on the road touring with Dark Dark Dark. That tour hits NYC soon: October 12 at Knitting Factory (tix) and October 13 at Le Poisson Rouge (tix). All tour dates are listed below.