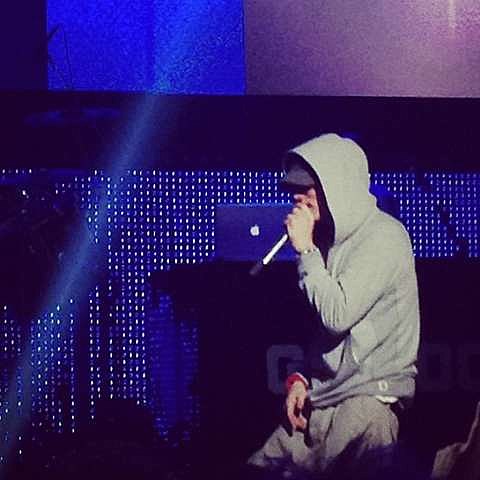 New Brooklyn venue The Well opened last month with a Cam'ron, Flatbush Zombies, Asaad & Reese show (7/14) and the venue's second show will be tonight (8/10), after Os Mutantes cancelled their 7/28 show at the venue. Tonight's show is with Slaughterhouse, Freeway, LAD & Willie the Kid, J the S, Da Circle, and special guest Pharaohe Monch. Tickets for tonight's show are still available and we've also got a pair to give away! Details on how to enter are below.

Rumors are flying that there will be a few guests showing up at tonight's show. One of those possible guests is Beanie Sigel and there is talk that Slaughterhouse's boss at Shady Records (aka Eminem) might show up too. If that sounds like a stretch, it should be noted that Eminem performed in NYC last night (8/9) as part of Casio's G-Shock 30th anniversary at Manhattan Center, which Slaughterhouse was also at. XXL Mag was at the show and they write:

With a live band setting the mood and clips from some of his iconic music videos playing on the big screen behind him, Em had the crowd in the palm of his hand and he proceeded to give them what they wanted.

The masterful Detroit rhyme slinger ripped into classics such as "My name Is," "The Real Slim Shady," "Cleaning Out My Closet" and "Love the Way You Lie," dedicating the "Lie" to the ladies in the audience.

UPDATE: Due to a neighborhood flood watch, this show has been rescheduled to happen on September 8. Tickets purchased for tonight's show will be honored, as will the winner of the pair of we are giving away in this post.

Videos of Eminem at last night's show are below. Also below is a video of Slaughterhouse discussing tonight's show at The Well and the contest details.

Eminem - "My Name Is" at G-Shock 30th Anniversary

Eminem - "The Way I Am" at G-Shock 30th Anniversary

Eminem - "I Need A Doctor" at G-Shock 30th Anniversary

Eminem - "Won't Back Down" at G-Shock 30th Anniversary

--
For a chance at winning tickets to see Slaughterhouse at The Well TONIGHT: either tweet something that includes both @BrooklynVegan AND "SLAUGHTERHOUSE" in the tweet, or send an email to BVCONTESTS@HOTMAIL.COM with the subject line "SLAUGHTERHOUSE". Include your first and last name in the email. We'll pick a winner at random and contact them with more details. If you enter by email, it will not be shared with anyone else. Good luck!
--