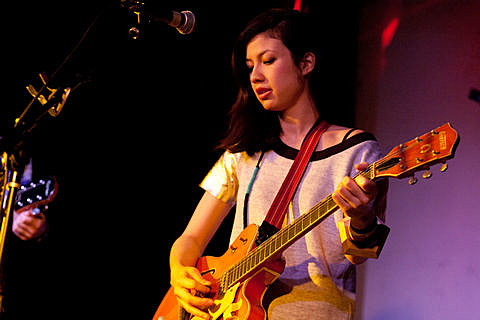 On May 7, Emmy the Great released a new single for the track "God of Loneliness," which was originally written for her 2011 Virtue LP but did not appear on the album and was since reworked. The single came out on Close Harbour in the UK and is backed by a cover of Mazzy Star's "Fade Into You." You can stream "God of Loneliness" below and also check out videos of performances of both songs at London's Queen Elizabeth Hall from this past March. She nails Hope Sandoval's breathy vocals in "Fade Into You" pretty well. (Hope Sandoval herself performed "Fade Into You" recently at 6 California shows).

"God of Loneliness" is available as an iTunes download but the Mazzy Star cover isn't included. The single will be included with the deluxe edition of Virtue, which is due out in the US on May 22. The deluxe edition also includes bonus tracks from the Virtue sessions, "Paper Forest (Birds)" and "Emily."

All videos, comic strips, and streams are below...

Emmy the Great - "God of Loneliness"