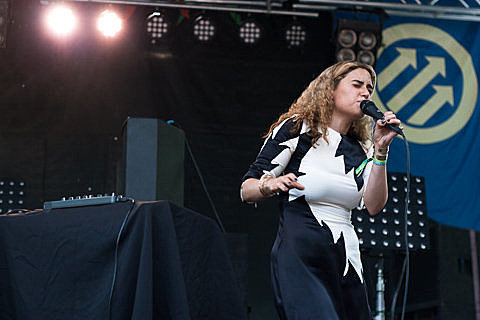 Empress Of, aka NYC art-pop musician Lorely Rodriguez, has released a new single in anticipation of her upcoming debut album, which will be out later this year via Terrible/XL Records. "Water Water" features Lorely balancing airy vocals over a pulsating electronic instrumental. Stream the new track in full below.

Empress Of just played a DJ set at the BV-presented Porches show earlier this month, and has a run of live sets lined up. Lorely plays a show at Joshua Tree in California with Jamie xx and Jon Hopkins tomorrow night (4/16) and then comes to NYC for a five-night stand residency at Elvis Guesthouse from April 28 to May 2 with each night supported by to-be-announced special guests. Tickets for all five nights are on sale now. Empress Of will also support Florence & The Machine for a pair of non-NYC dates in June (hopefully Florence's broken foot will have recovered).

All dates are listed, along with a stream "Water Water," below...