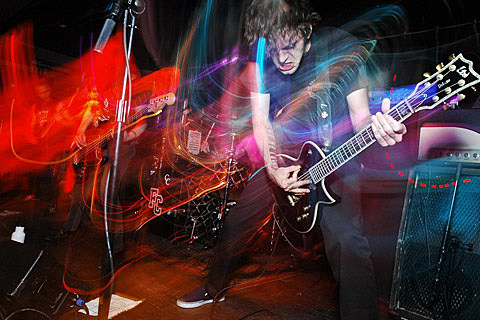 Let's be honest, the prospect of a band featuring a member of Fall Out Boy isn't the most enticing. But if you read deeper, you might recall that Andy Hurley of said band was always the one to sport shirts by Disfear, At The Gtes, Coliseum, Black Breath, Trap Them and more. Andy Hurley recently joined Milwaukee's Enabler (alongside members of Trap Them, Today is The Day, Harlots and others), and is currently on the road, making their way toward the studio to record a new LP, All Hail the Void. Look for that LP on April 24th through Creator-Destructor/Halo of Flies, but meanwhile catch their live show TONIGHT at Lit Lounge (1/9) with, as previously mentioned, Tiger Flowers and Brickeater. The show is part of the Precious Metal series.

Tiger Flowers played ABC No Rio with All Else Failed/A Life Once Lost over the weekend, and Saint Vitus with Whores/Javelina/Psychic Teens on Wednesday (pictures from that show HERE).

All Enabler tour dates and a bunch of streams are below.