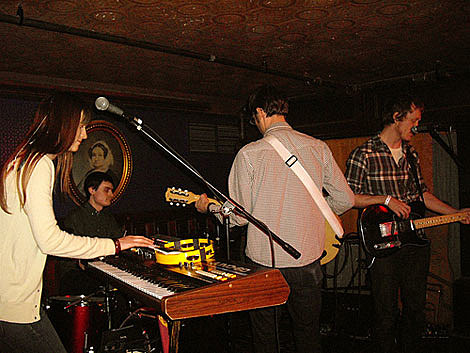 Au Revoir Simone had a very busy year, releasing their lovely third album, Still Night, Still Light, back in May. You can download the album's first single, "Shadows," at the top of this post. They toured almost constantly, and played one of the BrooklynVegan day parties at SXSW. They're DJing a party at the Madewell Store in Soho on Wednesday (12/16) from 7 - 9 with complimentary martinis (RSVP here) and will play Highline Ballroom on January 7 (with Alexa Wilding) (tickets are on sale).

ARS's Annie Hart also plays in Uninhabitable Mansions who, along with Sharon Van Etten, are opening for The Antlers at Bowery Ballroom on Tuesday (12/15). It's sold out. UM also play Cameo on December 20th, and Bruar Falls in January.

So, we asked a load of NYC-area bands to tell us how their 2009 went, via a handy questionnaire. As we get them back we're gonna post them. The first is from Annie Hart. Her answers below...

You released Au Revoir Simone's third album, Still Night, Still Light, this year. How'd that go?
I was so excited with the release. The record got a really great reception, which is wonderful for me, because when we finished we were all really proud of it. I said I didn't care if anyone else liked it, but I am overjoyed that it ended up that people did and do!

What were your favorite albums of 2009?
I really liked The Pains of Being Pure at Heart, the Phoenix record, Here We Go Magic, and other stuff that I am too consistently jet-lagged to remember if it came out this year or not.

Favorite Singles/Songs?
Diamond Rings, "All Yr Songs!!!!!" Constantly on repeat. And after I met the creator when he played Cake Shop, it got even better.

What was the best show you saw in 2009?
Arghhhh...I really liked They Might Be Giants performing Flood in its entirety at Poisson Rouge, I loved A Faulty Chromosome play around a folding table in a yard in front of a restaurant at SXSW, right around then Camera Obscura played in a church in Austin which was, shall I say, transcendent.

What was your most memorable musical moment of 2009?
When we got bum-rushed on stage in Lisbon by a friendly crowd of dancers.

What about non-musical moment?
This is a hard question...we traveled so much this year and saw so many new places and met so many people. I get so excited for so many things happening in my life it's hard to separate them out from just a general feeling of goodness.

Favorite place to play in NYC?
I think I still love Bowery Ballroom.

Best new NYC-area band?
Uninhabitable Mansions. But that's just because I get to scream.

What's the best and worst thing about being in a band in NYC in 2009?
Best thing is that there are friends and opportunities everywhere, and the worst part is all the expensive rent. BLECH.

What is the proper way to incorporate "meh" into your band name?
Doug [Marvin, former Dirty on Purpose drummer and Annie's husband] suggests Au Revoir Simeh. He says that one a lot.

What's your favorite Michael Jackson song?
That man has a catalog of amazingness. Is it the worst thing in the world if I say "Black or White?" I don't own it, but I like when it comes on the radio and when I was however old I was when it came out I would watch MTV endlessly just to see the video for the umpteenth time, which was easy, since they played it every 4th song.