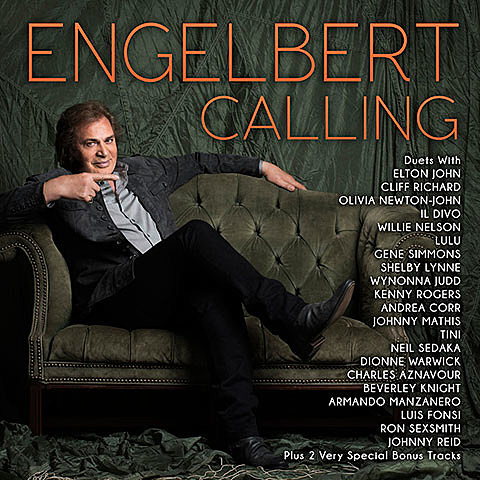 Neil Diamond is not the only classic pop crooner with a new album...

"Engelbert Calling" is the new album and the first ever duets album from the legendary and incomparable Engelbert Humperdinck. Known as the world's greatest balladeer, this collection is his 80th album release, arriving more than 45 years after his massive hit "Release Me" reached #1 on the pop charts and created a worldwide frenzy. This new album comes as a celebration of his remarkable career which has spanned nearly five decades and includes sales of more than 150 million albums world-wide, including 24 certified with platinum status and 63 with gold.

The album was produced by Grammy award winner Martin Terefe, who is best-known for his work with Jason Mraz, James Morrison, KT Tunstall, and Mary J Blige. "Working with Engelbert is such a truly remarkable experience," Terefe stated when asked about his work with Engelbert. "He is without a doubt one of the best singers around today and brings so much other musical knowledge to the table."

"He is one of the sweetest and nicest people I have ever worked with," Elton John said about his experience collaborating with Engelbert. "We had a great time singing together and he is so quick, what I call a 'one-take singer,' 76 years old and still sounding as good as ever!"

"I am grateful to have had the opportunity to partner up with some of the best artists in the history of music." Engelbert said about the album. "To continue putting out successful albums after 45 years in the business is a real testament to the loyalty of my great fans and this album is a 'thank you' to all of them."

Tracklist and album stream via Spotify, below...

CD 1
01. Something About The Way You Look Tonight with Elton John
02. Since I Lost My Baby with Cliff Richard
03. Never Never Never with Olivia Newton-John
04. Spanish Eyes with Il Divo
05. Make You Feel My Love with Willie Nelson
06. I Need You Now with Lulu
07. Spinning Wheel with Gene Simmons
08. Real Love with Shelby Lynne
09. You've Really Got A Hold On Me with Johnny Reid
10. Release Me with Wynonna Judd
11. She Believes In Me with Kenny Rogers
12. Better with Louise Dorsey

CD 2
01. Ain't That Peculiar with Andrea Corr
02. A Certain Smile with Johnny Mathis
03. Kiss Me Honey with Tini
04. The Hungry Years with Neil Sedaka
05. It Matters To Me with Dionne Warwick
06. She with Charles Aznavour
07. After The Lovin' with Beverley Knight
08. It's Impossible / Somos Novios with Armando Manzanero
09. Quien Te Dijo Eso with Luis Fonsi
10. Something To Hold On To with Ron Sexsmith
11. Father And Son with Bradley Dorsey