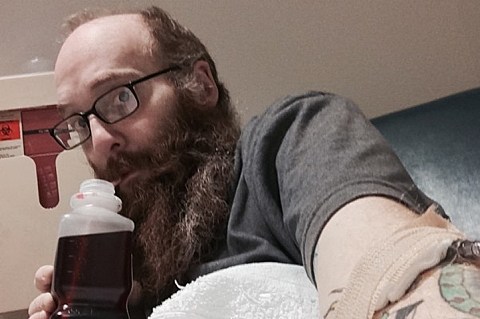 Sad news from NJ hardcore mainstays Ensign. Guitarist/bassist Nate Gluck has been diagnosed with cancer in his stomach and esophagus. On top of that, his family is facing hard financial times, and Nate's friend launched a GoFundMe campaign to help raise money for his cause. Here's an excerpt from what she wrote:

My neighbor and very close friend, Nate Gluck, has recently been diagnosed with cancer in his stomach and esophagus. A lof of you guys know him too, since he has played in pretty much every hardcore band in NJ ever at one point or another (including Ensign and Strength 691) . He is the sweetest guy, and all of us who know him love him dearly. He's always smiling, always warm, and always there when you need him.

Things aren't very good right now. Nate is barely able to eat and will be beginning chemo and treatment really soon. He has lost a ton of weight and he is often too ill even to drive, and he is in a lot of pain. Despite all of that, he is in good spirits and ready to fight this thing. His optomism about all of it makes my eyes well up. But that's how Nate is. He handles everything with a smile.

Things have been incredibly hard on them as of late, and they desperately need our help. Nate's wife, Christy, is one of my best friends. She lost her job, has been unable to find a new one, and now desperately wants to be able to take care of Nate while he is undergoing treatment. To make matters worse, Their financial situation has become dire. They will lose their home if they are unable to pay their mortgage and the medical expenses are already mounting. It's horrible, and if they lose this house they will not have anywhere to go nor the funds to find a new home. They have no savings and the medical bills are already piling up.

If you want to help out, you can head here to donate. As of this post, they've reached just over half of their $100k goal, which so far has been enough to get Nate and Christy out of foreclosure.

This is a tough post to make, but a necessary one. Nate recently got some news that nobody ever wants to hear. Nate is the heart and soul of Ensign, and through this band's long and chaotic existence has always been the driving force pushing us to play shows, to write new music, to not rest on our past accomplishments but to keep going and be a better band tomorrow than we were today.
So if you can, please lend a hand to our friend, bandmate, and brother, because he needs it right now.

Other bands have shown their support too, including Converge, Throwdown, boysetsfire, Shai Hulud, Strife, and more.

Ensign were recently in NYC opening the Grade reunion.