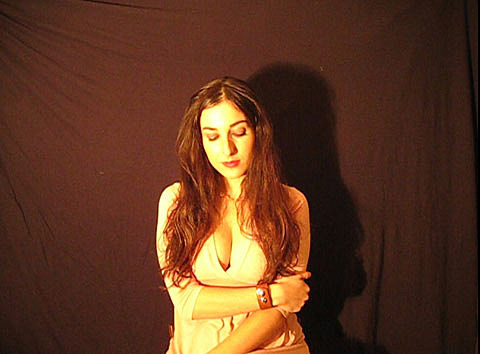 Marissa Nadler and Glass Ghost will team up to play Envelope, a new Bushwick venue, record label and recording studio that was founded by indie-folk artist Chris Garneau and Caralee McElroy (ex-Xiu Xiu/Cold Cave). The $30 tickets to the November 11th show include beer, wine, liquor and food and are on sale now. The address of the venue isn't listed, but will be revealed to ticket buyers.

The NYC show is one of three east coast dates for Nadler who will also play ATP's The Nightmare Before Christmas in Minehead (with Godspeed, Neurosis, countless others), and go on a short Irish tour. All dates below.

Nadler is also looking to record a new LP, but she needs your help! (well, not anymore actually). She has started a Kickstarter page to aid in the funding of her new LP and its associated costs. The campaign ends in early December, but is already well on its way toward completion ($8900 of $11k raised) is already complete, and then some. As of this posting, which is now an updated version of a post that was written a few days ago, $11,550 has been pledged, and she only asked for $11,000. You still might want to give though because each donation actually gets you something - varying in increments of $10 (a digital download of the LP) to $6k (Marissa plays any set you want whereever you want).

Speaking of ATP's The Nightmare Before Christmas, Nadler will probably cross paths with Genesis P-Orridge who WILL be on hand when Throbbing Gristle performs at the festival, despite recent reports of P-Orridge's exit from the band:

We have seen and heard various inaccurate, erroneous, even sometimes libelous speculations about why we felt compelled to drop out of the current Throbbing Gristle tour. As a result we intend to address these matters in full as soon as possible. We hope that what we state now, and later, will be clear, will not fan the flames of destructive gossip, will not seem negative and will reduce an somewhat dramatic situation into a simpler story. We want to make it clear right now that we did not, and have no wish to quit TG. Obviously there is more involved than just that simple statement. Personally, at this point of my life, my position is that the inner workings and dynamics of any band, but especially of TG, are as intimate, unique and most of all complex as they are within any family. Unfortunately, even at the level TG occupy in popular culture, band business becomes potentially everyone's business. We all know the internet has amplified the speed of distribution of "information" almost as fast as it has accelerated the decline of accuracy worldwide. We have no interest in pointing fingers (or is it claws?) at various people or sites and accusing them of letting the cat out of the bag. Bickering is never attractive, not one on one nor within the realms of an ever expanding media fueled by smart phone technologies and laptops. As soon as we have composed a written version of what series of events we believe led to my feeling unable to remain part of THIS short tour by the re-grouped TG that feels acceptable we will post it here.

Glass Ghost's latest LP, Idol Omen out now on Western Vinyl, features both "Like A Diamond" and "The Same". Check 'em both out above. The Envelope show is their only current tour date.

All Marissa Nadler tour dates and some video is below.