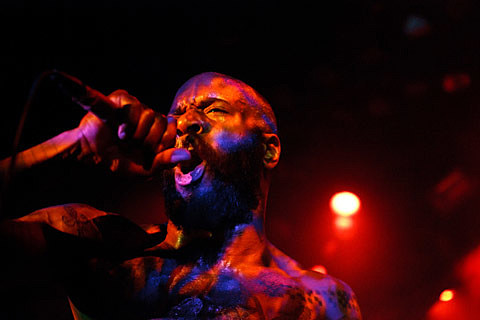 When Death Grips allegedly released their new album, NO LOVE DEEP WEB, for free on their website because their label, Epic Records, wouldn't give it a release date, many people were wary that the whole thing was a bit of a publicity stunt. Then on Wednesday (10/31), Death Grips posted to their facebook a screenshot of what appeared to be an email from Epic stating that the band violated their contract and were to remove the album from the internet immediately. They wrote to PItchfork to explain that posting the email was to prove the NO LOVE DEEP WEB leak was not a publicity stunt. Of course, that email itself could have been another publicity stunt. But at that this point it appears there was in fact some truth to the news surrounding the album's release, because Pitchfork points to an unsurprising letter from Epic Records stating:

Epic Records is a music first company that breaks new artists. That is our mission and our mandate. Unfortunately, when marketing and publicity stunts trump the actual music, we must remind ourselves of our core values. To that end, effective immediately, we are working to dissolve our relationship with Death Grips. We wish them well.

The whole thing makes you wonder if Death Grips' plan from the start was to sign with a major label just so they could publicly screw them over. They never quite seemed like the type of band who would benefit from one to begin with. And It's also worth noting that the band didn't only leak the album for free (tons of people would have done that anyway), but they also released it under a Creative Commons Attribution 3.0 license, which allows anyone to use the album's material in commercials, television, film, etc, or even press and sell the album themselves. Assuming Epic Records funded the recording of NO LOVE DEEP WEB, it was only a matter of time before the announcement that they were dropping Death Grips came.

The full album stream of NO LOVE DEEP WEB is below...