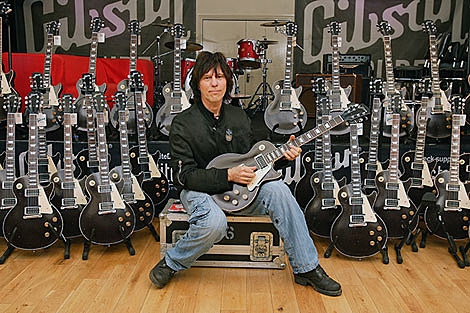 'Eric and I played together in Japan earlier this year and had a blast. Since then we have been in regular contact and talked about doing a similar show for our fans. Looking forward to the shows in 2010," said Jeff Beck.

"I've always considered Jeff Beck to be one of the finest guitar players around. He's a friend, a great guy, and a truly gifted musician. We had such a fun time in Japan that it seemed natural to play together again," said Eric Clapton.

Jeff and Eric will perform "perform together and apart" at the two previously-mentioned Madison Square Garden shows they're playing on on February 18 & 19. Tickets go on AmEx presale at noon.

Muse and Silversun Pickups are playing MSG in March.

Tickets also go on sale @ noon for the special Opeth show coming up at Terminal 5.

Tickets went on sale Saturday for the Drums/Surfer Blood show coming up at Bowery Ballroom.

A whole bunch of other shows recently went on sale too.