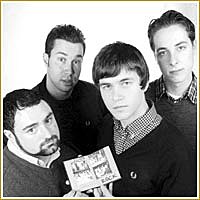 Post-hardcore/emo-y NYCers, Errortype:11 will play a reunion show at Mercury Lounge on August 8th with Joshua English (ex. Six Going On Seven), and I Hate Our Freedom. Tickets are on sale. Pilot To Gunner was also originally scheduled to play the show, but has cancelled.

"Errortype: Eleven was formed in 1998 shortly after the demise of World's Fastest Car, the Walter Schreifels-led band [Arthur Shepherd, Guitar] had joined the year before. Over the years, band members included Phil Hanratty, Adam Marino (Saetia), Scott Martin, Erik Matheu, Keith Moore, Sammy Siegler (CIV, Gorilla Biscuits, many others), and Ty Krek. ET11 released their S/T debut as well as their follow-up, Amplified to Rock, on Schriefels's imprint Some Records, with the The Crank EP appearing on (you guessed it) Crank in 1999. The band toured the US and UK and eventually split in 2002 when Phil Hhanratty left the band. The remaining members went on to form Instruction with Tom Capone (Quicksand)

Walter Schreifels has a few shows of his own coming up: one "solo" show going down on June 17th at The Studio @ Webster Hall (tickets now on sale), and a short tour in Rival Schools with Eagles Of Death Metal including Webster Hall on August 6th (tickets here).