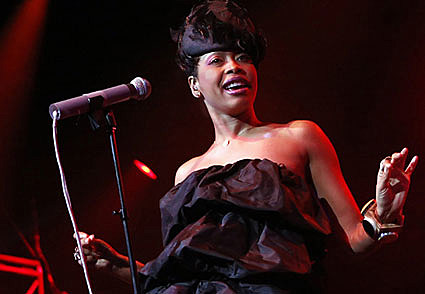 "She can sing in flinty syncopated interjections, in sassy turns and in cooing long lines, and her voice alludes to Billie Holiday and Dinah Washington as well as to Diana Ross. Most of her songs are undulating two-chord vamps that give her room to free-associate between choruses...." [Jon Parales, NY Times]

And Sasha Frere-Jones liked it even more....

Erykah Badu played Radio City Music Hall on Friday night. I am glad I (sort of) reined in my enthusiasm for Robyn's recent live show. Hyperbole comes back to haunt you. How to get hyperbolic without being the Boy Who Cried Show? Not sure. Instead of saying that Badu's performance will not be bettered any time soon (though it won't), I'll say that her show gave everyone in the house serious bragging rights. Dylan in 1965, Metallica in 1985, Bad Brains in 1981--it was one of those points on the arc. If you want to know who is at her peak, who is both of her moment and channelling so many forces that her work spills out over the edges of history and stops time, that's Erykah Badu in 2008. [SFJ - The New Yorker]