Escort at MHOW in February (more by Chris Gersbeck) 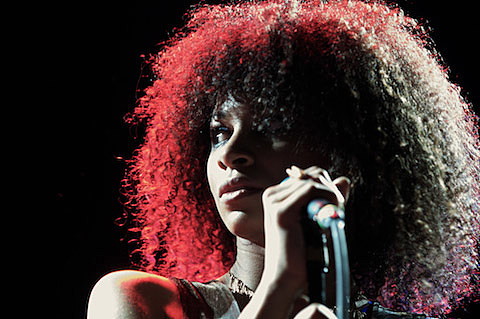 Brooklyn's 17-piece disco orchestra Escort are releasing their self titled debut full length on November 15 on their own Escort Records. The album features the single "All Through The Night," which you can watch the video for below. Also below is the album's artwork and tracklist.

Escort are having a record release party at Cameo Gallery on November 18, where they'll be DJing along with other DJ sets by Prince Language and Darshan Jersani. They're also playing a live performance of the album at Music Hall of Williamsburg on December 17 with Midnight Magic and DJ sets by Sean B and Will Automatgic of Spank, who is presenting the show. Tickets for the MHOW show are on sale now.

Tracklist:
1 Chameleon
2 Cocaine Blues
3 Make Me Over
4 A Sailboat in the Moonlight
5 Why Oh Why
6 Starlight
7 Bright New Life
8 All Through the Night
9 Indigo
10 All That She Is
11 Karawane